Wolvarks serve the Sekto Springs Bottled Water Company by running factories and doubling as security for those facilities. They often bully the Grubbs and continue to force them off of what little land they have.

The Wolvarks are a species in Oddworld that are ruthless towards any of the other species, especially the Grubbs. There only seems to be male Wolvarks in the game, that or it's only the males who work for Mr. Sekto and cause trouble. Unlike the Clakkerz and Outlaws, who have Western accents, Wolvarks appear to have Southern accents. These creatures almost look reptilian, with a tail. The Wolvarks have green or pale beige skin tone with beady eyes and ears protruding from the sides of their head. They are skinny and ugly, as their underbite contributes to their disgusting tail. They resemble toads as their scales are grubby and have warts on some parts of their face.

There only seems to be male Wolvarks in the game, that or it's only the males who work for Mr. Sekto and cause trouble. They are sadistic rednecks who are ill-minded and would die out of their stupidity for their duty. Different from the Outlaws, these soldiers are trained under the leadership of Mr. Sekto and are vicious to the point of killing anything that stands in their way of Sekto's call of duty. They were employed by Sekto to protect his own industry from anyone who opposed or seemed to be a threat to him and his businesses: Sekto Spring Dam and Sekto Spring Bottled Water Company. They are known for being the underhanded mercenaries of the evil captains of industry at this time.

Wolvarks are cruel and unintelligent beings that have a lust for death. They are known to steal the Grubb's land by the order of their boss; this leads to further bombings of the Grubb's sacred villages and an ordered ban on fishing. Their cruel personality plays out through their means of enforcing their boss's word by impaling, hanging, and crucifying the Grubb's who were caught in the act of fishing. Their ill-minded nature is disturbing as they will do anything to get the job done, leaving a slaughter of the Grubb's people in a ruthless fashion. They are increasingly dim and lazy, usually spending their time watching idiotic television shows or practising the art of taxidermy. They are corrupt and sadistic, just like their leader. Also, Wolvarks love enjoying the smell of roadkill. They will die for their paycheck, which gives them a meaning in life within all of Western Mudos.

Wolvarks are trained in various forms under the command of Sekto Industries, each type specialized in a field of There are 6 types of Wolvarks:

These types of Wolvarks are the basic trained soldier units. They often are equipped with a gun which looks like a pick-axe. These are the basic mercenary type that has guns that fire single shots, like the Outlaw Minion Shooter.

These types of Wolvarks are heavy unit soldiers. They are often equipped with a gun that shoots at a fast rate, able to wipe out a whole town. They are equipped with gas masks and have guns capable of rapid fire. Despite their mask, they are not immune to Stunkz.

These types of Wolvarks specialize in Slog units. They wear a backpack on their back that contains slogs trained to fight their enemies. They seem to carry an endless supply of the creatures and can toss them out one by one.

These types of Wolvarks are specialized in the use of explosives and grenades. They are equipped with a riot shield, similar to the ones that S.W.A.T. team members use, and grenades which can stick to the player, though they can be shaken off. They seem to deflect all ammo inflicted upon them while their shield is up. To conquer this dilemma, go for their sides with a Fuzzle or a Boombat. These ammo types distract them as they try to shoot sticky grenades towards you.

These types of Wolvarks are specialized in the field of sniping. They wear infra-red goggles as they handle sniper rifles, capable of depleting health fast by one shot.

A shock sphere is a mechanical hovering tank that Wolvarks use in the line of battle. They ride inside it and can cause close or medium range damage, producing electricity that charges up within the sphere. It takes a lot of damage to take these Wolvark Units apart. 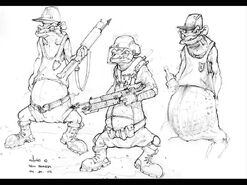 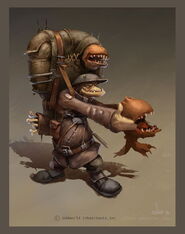 The varying types of Wolvarks found in Stranger's Wrath

Concept Art of a Wolvark 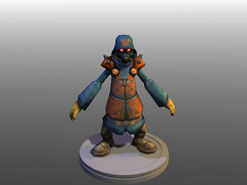 A Rendered Model of the Wolvark Semi-Auto Variant 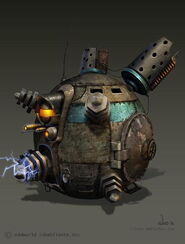 Concept Art of a Shock Sphere 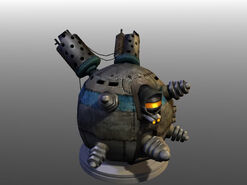