Vykker's Labs. Molding the future out of you.

Vykkers Labs, or Vykkers Labs 13 as seen in Oddworld: Munch's Oddysee, was a large airborne lab which promotes cruelty toward animals and the latest in pharmaceuticals. It's run by, as the name suggests, the sadistic Vykkers, with Irwin and Humphrey being the main bosses. Next down the chain of command at the Labs are the Interns, who served the Vykkers. Vykkers Labs often experimented on animals, having produced products such as Gum Rot, Butt-Flo, Baby Chow, and Chill Pills by first testing them on the innocent Fuzzles. The Labs also produced and distributed Mudokon Labor Eggs, hatched by the enslaved Mudokon Queen, Sam. Vykkers' Labs was also responsible for the near-extinction of Gabbits, having sold their eggs as an edible delicacy, Gabbiar, and using their lungs as emergency transplants for those with lung problems such as cancer. However, when they captured Munch, the last Gabbit, instead of turning him into food or selling him on for a hefty price, Irwin and Humphrey inserted a sonar port into his head, in an attempt to use Munch as a means of rounding up more creatures to experiment upon. However, Munch escapes, and together with Abe, brought the Labs to its knees, leaving Oddworld's pharmaceutical business severely damaged. Shortly after retrieving the last can of Gabbiar, Abe explains how whenever he leaves such a horrible place, they usually explode. Munch tells him that the Fuzzles had already dealt with that. Humphrey and Irwin then entered the lab to find loads of explosives, one with a digital screen, saying "Guess Who?" meaning the Fuzzles. They cry and embraced each other as they prepare for the Lab's inevitable destruction. The Lab then plummeted down to the surface of Mudos in a ball of flames.

The exterior of Vykkers Labs is a massive saucer-shaped airship, with the company's name inscribed on the lower surface of the structure. The lab features what appears to be a gravity lift on its base which is used to abduct unsuspecting future test subjects. The facility appears to be a kilometer in length and several stories tall. The lab can be accessed either via gravity lift, through means of air transportation (aircraft) or (when Abe first went to rescue Munch) the Big Well.

The interior of the Vykker Labs 13 complex is rather complicated. Within the massive balloon there are a series of large and small walkways and shafts. The large walkways are used for storaging bulky stock while the small shafts, referred to as "Poop Shoots" are used for distributing garbage. Furthermore, sitting at the top of the balloon is a large building. Inside this building or series of hallways complete with massive steel doors and padded walls. These hallways may lead to large operating rooms. Within the large operating rooms are multitude of shelves, cabinets, and trash bins, capable of holding multiple Vykker tools and equipment. At the center of the operating rooms usually sit adjustable padded chairs that serve the dual purpose of keeping otherwise rowdy patients still. Finally the facility boasts an immense series of computer operated cages that utilize electrical locks to restrain carnivorous Fuzzles. 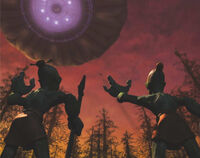 A ground view of Vykkers Labs 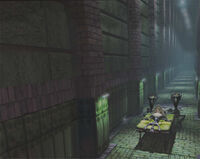 Two Interns carting a patient down a hallway inside the facility. 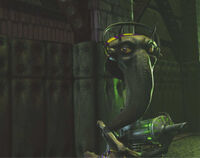 An Intern on patrol inside the lab 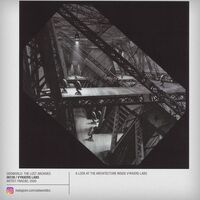 Concept Art for the architecture within Vykker's Labs 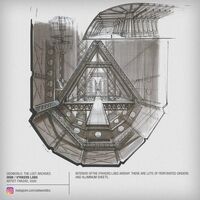 Concept Art for a passageway through Vykker's Labs 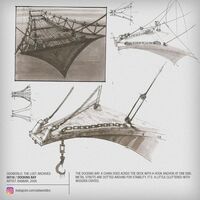 Concept Art for a docking station outside of Vykker's Labs 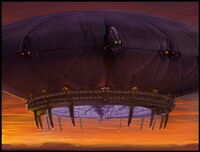 Exterior Concept Art of Vyyker's Labs above the Big Well. 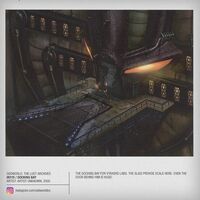 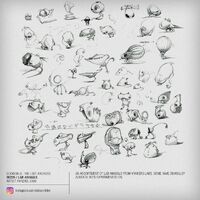 A group of caged creatures commonly tested on in Vykkers Labs.

A Concept of Vykkers Labs complete with a wall full of pickled creatures. 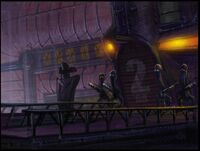 Lulu at the gates of Vyykers Labs 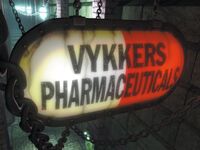 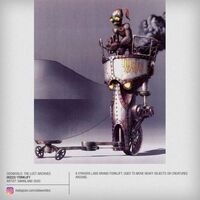 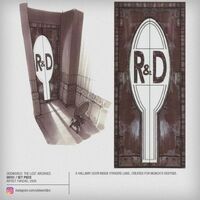 The gates to research and development