Vice President Aslik is the administrator of FeeCo Depot and is a high-ranking executive of the SoulStorm Brewery.

While running the transport system known as the FeeCo Depot, Aslik meets with fellow heads of office, General Dripik and Director Phleg, to discuss the situation regarding SoulStorm Brewery being infiltrated by the Mudokon renegade/former slave, Abe. After the disappearance and presumed death of RuptureFarms Chief Executive Officer Molluck, Dripik and Phleg voice their concerns that, if Molluck were to return, they'd be held accountable for the factory's demise. Aslik declares that the time had come for the three of them to run matters on their own terms. Rather than bicker, he asserts that they work together to ensure the absolute safety of SoulStorm Brewery by locking the entire facility up with such stringency that Abe would "have to be invisible" to get into it. The three then relish in this plan by sharing a laugh.

After Abe successfully infiltrates The FeeCo Depot Executive Office, Aslik addresses the Mudokon workers through the news program Magog on the March. He insists that "Uncle Aslik" is taking good care of them, loving them all like they were his own, but angrily states that should they fail to capture Abe, they would all be subjected to the brew vats.

While under Abe's mind-control, Aslik uses the Security Fone to order the Slig in charge of security to disarm the main gate. He is subsequently killed when Abe releases his mind-control.

Aslik is the most inventive, intelligent, and articulate of the three heads of office and dislikes being in a lower ranking than the other two Glukkons he works with.

As Vice President of the Magog Cartel, Aslik wears finer clothes than others. His outfit consists of a grey suit over a light red shirt and simple black dress shoes. He also sports a glass monocle held in his left eye and wears his executive pin on the neckline of his shirt.

He promotes tourism through information screens with "Uncle Aslik's Tips", and generally tries to seem charming and likable, even towards the Mudokon slaves. However, the blowhard personality that is prevalent in almost every other Glukkon is present in Aslik, and he is prone to bouts of rage.

When renting videos, Aslik returns them without rewinding them first.[1] 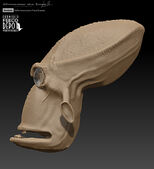 side of head render

Full specs of Aslik
Add a photo to this gallery

Retrieved from "https://oddworld.fandom.com/wiki/Vice_President_Aslik?oldid=22096"
Community content is available under CC-BY-SA unless otherwise noted.