Lorne Lanning
The Three Weirdos (also known as the Mudokon Spirits, Ancestors or Those Dudes Now Dead) are a trio of ghosts of Mudokon ancestors. They first appear to Abe when Big Face accidentally knocks Abe off a stand causing a vision to occur during his unconsciousness. In the vision, they tell Abe that the Glukkons are digging up their bones and tells him to come to Necrum. Later, after Abe has passed all the Scrab and Paramite temple tests, the Three Weirdos give Abe the power to heal Mudokons sick from SoulStorm Brew. They also tell him to shut down SoulStorm Brewery.

The Three Weirdos serve as tritagonists of Abe's Exoddus.

As the non-corporal spirits of dead Mudokons, the Three Weirdos appear as transient beings, capable of levitation and dream walking. They emit a purple aura and their eyes glow a stark, iridescent orange. Each of the Weirdos also dons a sacred Mudokon headdress.

Due to SoulStorm Mining Company's excavations at the Necrum Burial Grounds, the sleeping bones of the Three Weirdos have been disturbed and extracted. As a result, each of the Weirdos appear to have lost at least one limb each, with one of them missing their entire lower body. 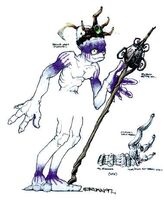 Concept Art of a Weirdo from Abe's Exxodus. 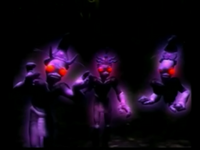 The Three Weirdos approaching Abe in the Temple 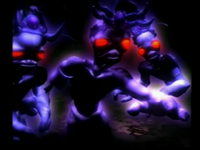 The Three Weirdos informing Abe of what he must do in Abe's Exxodus.

The Three Weirdos as they are portrayed in the opening cutscene of Abe's Exoddus
Community content is available under CC-BY-SA unless otherwise noted.
Advertisement