The Schism refers to a period in Oddworld's history in which the Mudokons, after discovering a handprint-shaped formation on one of the planet's moons, declared themselves as the chosen race, causing outrage from their Glukkon allies.[1]

Long before the enslavement of the Mudokons, they were a highly spiritual and respected race, part of the upper echelons of Oddworldian culture, who served as advisors to war faring species, akin to Tibetan monks of the 12th century. While the Mudokons themselves didn't go to war, the species they helped committed what Lorne Lanning refers to as "not-necessarily-admirable stuff".

Similarly to the Mudokons, the Glukkons at the time were also spiritual creatures, who - while the Mudokons were busy advising others - had their own era, where their main interest was alchemy. Everything changed however, when the Mudokon Moon revealed itself, bearing the paw of the Mudokon species, which the Mudokons took as a sure sign of superiority over everyone else, including the Glukkons. The Glukkons desperately tried to disprove them using their alchemy, before an undisclosed "disaster" occurred, that wiped out most of them.

The fact that they weren't able to disprove the Mudokons embittered the Glukkons and turned them into "Enclosurists", who from that day on never wanted to look at the treacherous sky again. Throwing their spirituality aside, they turned to science, which combined with their hate for the Mudokons set them up for the ruthless enslavement of others.

Concept Art of a Tribal Glukkon, maybe what they looked like before the days of the Schism and the Age of Alchemy. 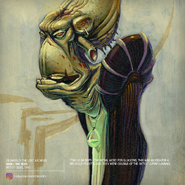 Close-Up of a Glukkon Priest with Additional Notes