The Oddworld: Stranger's Wrath - Official Soundtrack is a physical and digital distribution of Oddworld: Stranger's Wrath's in-game soundtrack. The game's music, composed by Michael Bross, has been released in multiple formats over the years. Volume 1 was first released on CD in Bross' own online store in 2007 as well as several digital music platforms.[1] A limited 500 run collector's edition of the CD was later produced by KeepMoving Records in 2008.[2] In 2017 volume 1 was re-released as a set of colored vinyl records printed by Black Screen Records.[3] A limited edition of the vinyl records was available from Limited Run Games and has since then sold out.[4] The vinyl re-release also includes a teaser for the release of Volume 2 in the form of a 7 inch bonus record containing two scores that have never been released before.

The digital release of the soundtrack can be found on various online music platforms, including iTunes, Spotify, Steam and Michael Bross' Bandcamp page.

In May 2008 a limited collector's edition of the soundtrack was made available. The CD has the same track list as the original CD release, but includes an alternative packaging and CD art as well as a 24-page full color booklet featuring track descriptions, Michael's interview with Game-OST and exclusive (at the time) CG and concept art for Stranger's Wrath.[2] Only 500 copies were made of this limited edition version. The few copies currently being sold on the internet go for as much as $250,00.

The original CD back. 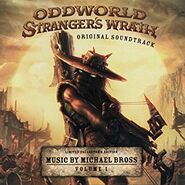 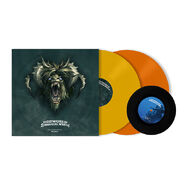 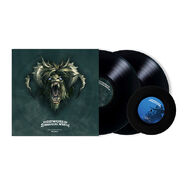 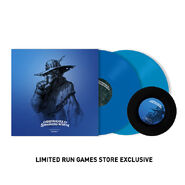