The head office of SoulStorm Brewery is Molluck, the same Glukkon CEO of RuptureFarms 1029. However, since the Mudokon insurrection of RuptutureFarms 1029 and Molluck's sudden disappearance, the Brewery is now entrusted to the far less capable Glukkon, the Brewmaster.

The main building was divided into separate individual hubs which all led to different sectors of the Brewery:

The building contained the Tear Extractors sectors used to retrieve Mudokon tears for the brew. After the incident at RuptureFarms, the Brewery was fashioned with wide varieties of heavy ordinance security including armed Greeters, numerous security obstacles, as well as countless Slig and Slog lances all commanded by Junior Executives.

In the canonical Good Ending of Abe's Exoddus, the Brewery's Boiler Room is infiltrated by Abe and the factory is destroyed by a huge explosion due to massive boiler pressure. The Brewmaster was killed in the explosion and has never been mentioned since then.

In the Bad Ending, however, Abe is betrayed by his fellow Mudokon friends in the Boiler Room. After he wakes up, Abe is caught and put in a Tear Extractor machine. Finally, the Brewmaster and his Slig companion execute the Mudokon terrorist by activating the machine.

During the events of Munch's Oddysee, a Glukkon Chump attempts to continue the production of SoulStorm Brew by trying to turn a native Mudokon windmill into a microbrewery, turning the Mudokons in the area into Scrubs with false promises. Abe and Munch managed to halt the microbrewery plans, separating the Chump from his change by possessing him and making him donate it to the Lulu Fund. 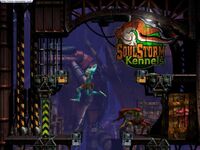 The Kennels at the SoulStorm Brewery 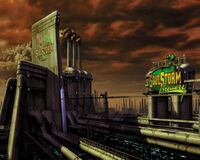 The Brewery at dusk 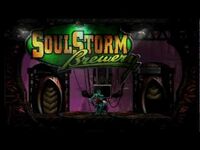 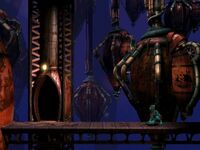