SoulStorm Brew is a highly addictive, non-alcoholic energy drink produced by the Glukkons at SoulStorm Brewery.[1] They can be found either in open crates or in a SoulStorm vendo with a limited set amount available. Two of its notable ingredients are ground-up bones and Mudokon tears. In Abe's Exoddus, a major plot twist was about its ingredients, while in Soulstorm the twist is about its effects.

SoulStorm Brew is highly addictive to Mudokons. Drinking as little as a few bottles is enough for a Mudokon to become dependent upon the drink. The Glukkons use this side effect in enticing Mudokons to work for them, making them dependent on the drink and promising more as long as they are willing to work.

Drinking too much of the brew will cause Mudokons to become ill and unwilling to listen to reason or orders. In the case of Abe, it also makes his farts highly explosive and able to be possessed. It's currently unknown how SoulStorm Brew affects other species on Oddworld, if it even affects them at all.

SoulStorm Brew illness may be cured with the spiritual power given to Abe by the Three Weirdos. It comes in the form of a chest tattoo and, when charged, allows Abe to instantly heal sick Mudokons in a radius around him by chanting. After the events in Oddworld: Abe's Exoddus, Alf has taken it upon himself to run a rehab clinic where addicted Mudokons can support each other and get rid of their addiction.

Projekt Soulstorm seeked to fufill these goals, with much of the work occuring in Vykker's Labs. Experimentation with Bone Powder, Mudokons tears, a variety of other chemicals, arcane alchemy and a large number of dead Mudokon testers produced a drink that fulfilled all three requirements. The drink became so successful that eventually all of the facilities on Mudos became directly connected to Soulstorm Brewery via pipelines. 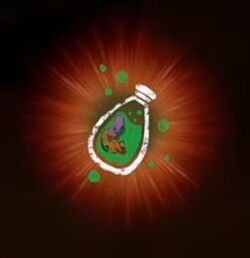 Splashy, sticky, very tasty and highly flammable. Soulstorm Brew will help you get the party started and then help you burn down the venue when you've had enough.

”— Description of the Brew Bottle.

Tried and tested over decades, Soulstorm Brew became a beverage that every labourer on Mudos got used to drinking. Some labourers even collected the caps off of their brews. Since Brew was delivered via pipelines, most facilities re-use the same set of glass bottles over and over again, providing the workers with a small bonus if they recycle their bottles.

When Abe and his followers fleed Rupture Farms, they did so with a large supply of brew that let them unwittingly escape the threat of withdrawal. However, in their panic to escape the Monsaic Sanctum after Necrum forces discovered the hideout, they discovered that Soulstorm Brew is incredibly flammable, which Abe used extensively throughout his journey to set Slig patrols alight and destroy wooden barricades. Abe also discovered that when mixed with detergent, this Brew could be turned into a surprisingly effective Smoke Screen, even more so if extra Bone Powder was added. He also discovered how to turn the Brew into Molotovs and even how to turn a fire extinguisher into a flamethrower by using Brew instead of foam.

The addiction and cardio-vascualar failure induced by Soustorm brew can be cured with an antidote made from Paramould, Moongrass, Meetlebat Venom, Sleech Guano, and Haggut Moss. While Abe only crafted enough for small doses during his time in Sorrow Valley, Toby and Alf figured out a way to cure every Mudokon on Mudos. By stealing industrial containers of the above-mentioned ingredients and mixing them using Soulstorm Brewery's own mixing machine, their cure would be automatically spread throughout all the factories via the Brewery's pipelines.

Alf reaching for a brew