Slogs are one of Oddworld's equivalents to a dog. They are known as ideal companions of Sligs and are commonly used as attack dogs.

Slogs are bipedal, red skinned, hairless creatures with no discernable eyes or nostrils, instead possessing large jaws with teeth to match and an acute sense of hearing. This sense of hearing may explain the nature of Slogs to bark idly as a method of echolocation. These creatures appear to be not dissimilar from Slegs, minus the tusks and aforementioned aspects. They were first introduced in Oddworld: Abe's Oddysee when you enter the Free-Fire Zone/Stockyards and have since been a recurring feature in each game so far. Slogs are common or at least popular pets for Sligs and can be summoned by their masters with a quick "Here Boy" (In PS, hold L1 Square/ In PC, press 2/ In NnT press right on Dpad). Sligs can also sic slogs on any living creature by saying "get 'em!" (in PS, hold L1 and X/ in PC, press 3/ in NnT press left on Dpad). Young Slogs are known as Sloggies and are the equivalent of pups. They are much smaller than a full grown Slog, but no less vicious, but Abe can avoid them simply by jumping over them. There is also an enormous variation of Slog, bigger than a Mudokon. Only two were seen in Oddworld: Munch's Oddysee in the level, Meep Herder Village. In Munch's Oddysee, Abe's powers have matured to the point where he is capable of possessing Slogs.

Skin color is a uniform shade of red. The Wide chest provides a large lung capacity, making slogs excellent for sprinting. The head has a boney protective crest. Short but strong legs provide low ground clearance. Four claws on padded feet with a single dewclaw. Gaping mouth is full of sharp teeth suitable for tearing flesh. Rear has a stubby tail that can be wagged.

Slogs are loyal companions and very protective of their owners. They always prefer fresh, bloody meat. They are usually seen sleeping or lying down in deserts, but slogs in industrial areas sleep standing up. The head crest is a sensory organ, as slogs spend their waking hours barking almost constantly, the barks bounce off walls and onto the crest, while the brain receives a mental image of their surroundings. They can also detect the adrenaline levels of their prey, effectively "smelling their fear". Regular beatings from their slig masters makes the domesticated slog pathologically temperamental, and more dangerous than a wild slog.

They're able to quickly discern friend from foe and will leap great distances towards possible enemies. They usually go for the head and throat. Once it has a hold of prey, it will shake it's mouth back and forth, ripping flesh apart into smaller chunks to be swallowed whole. Even as sloggies, they can take down Abe easily. Still, younger ones seem to prefer hunting in larger groups.

A pack of Slogs relaxing in a desert.

The distant cousin of the Slogs known as the Sleg 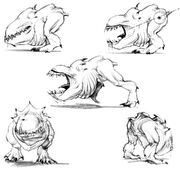 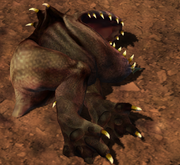 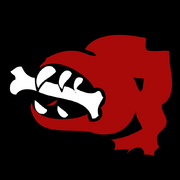 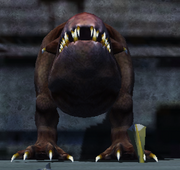 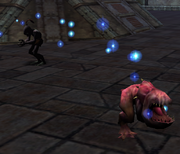 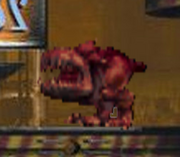 A Slog in Abe's Oddysee (PSX)

Concept Art of a Slog Hut