The Slig Barracks was a large training ground where new Slig recruits learned basic skills required for becoming a member of security personnel. These skills included, but were not limited to: proficiency of firearms, overseeing workers, and becoming familiar with new technologies (such as the helicopter pack of the Flying Slig).

The Slig Barracks was under the command of a high ranking Glukkon officer, General Dripik. The Barracks was ultimately destroyed when Abe assassinated Dripik and freed the Mudokons there. It's believed that there may be more Barrack installations in operation within other regions of Mudos.

The Barracks generally consisted of tents, guard towers, and other installations that were required for the training of Sligs. As with Bonewerkz, a central hub within the Barracks can be used to access the head Glukkon's office, which is in this case, known as "The War Room". The area appears to have a green/yellow color scheme, perhaps to symbolise that this is a Slig encampment. There is also much smog in the skies of the barracks.

1.) You have entered the Headquarters of General Dripik!

2.) Only General Dripik can partially disarm the main gate of SoulStorm Brewery by speaking into the Glukkon Security Voicelock.

3.) Possession of General Dripik is against Regulations.

4.) Terminating General Dripik while he is possessed prior to disarming the main gates, is against Regulations and is punishable by death and dishonorable discharge. 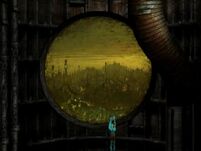 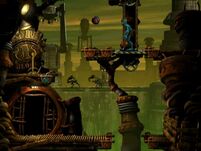 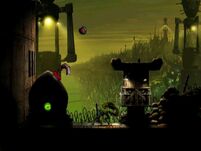 Alf and Toby passing by the outskirts of Slig Barracks
Community content is available under CC-BY-SA unless otherwise noted.
Advertisement