Oddworld Wiki
Register
Don't have an account?
Sign In
Advertisement
in: Articles in need of sources, Industrial Species, Sligs, Athropod

Least Concern
Sligs are a sapient species found on Oddworld, serving as security and personal assistants to the Magog Cartel. Even though Sligs generally enjoy what they do, they are essentially still slaves to the Magog Cartel. The Slig queen provides the cartel with her young and any Sligs that do not perform to acceptable standards are sent to face her wrath.

Sligs are one of the main antagonistic forces in all of the Oddworld games with the exception of Stranger's Wrath, and are the most common enemy found in the games that they are in.

Sligs were originally primitive and simple living creatures who preferred swampy regions, living in bodies of water such as bogs and lakes. However, when the Glukkons first encountered them, they turned out to be a sentient species. The Glukkons were able to easily negotiate that if the Sligs would work for them, they could grant them mechanical aids for easy mobility, which they reluctantly accepted. In return for the robotic Slig Pants that grant them the ability to walk, Sligs have pledged their loyalty to the Glukkon Industrialists as henchmen and bodyguards. In truth, much of the Glukkon success has been achieved by the Slig's combat capabilities. Although most sligs serve as security and basic law enforcement, some sligs can aquire more unorthodox jobs such as journalists, newscasters, vallets, and pilots.

Sligs are small, stocky creatures that posses green skin and five tendrils that cover their rather small mouths. When a slig is born, their appearance is vastly different from that of a mature slig with smooth pale skin, shorter or fewer tendrils, and large glassy eyes. The appearance of their eyes once they reach maturity is unclear as sligs are never seen without masks on, apart from a single concept art piece in The Art of Oddworld Inhabitants: The First Ten Years, where the eyes are described as "pathetic, small, helpless-looking." Sligs possess a variety of other unusual anatomical features; their middle fingers are reduced, and their heads are disproportionately large when compared to the rest of the body. They are somewhat short in stature since their back legs are vestigial and have fused together into a small tail-like appendage, forcing them to walk on their hands. Since this is the primary means of locomotion in the species, the forelimbs of Sligs are long, powerful, and muscular, much like those of apes. However, it's also implied that the fused structure of their legs is not a natural trait, with young sligs being forced to wear a "leg binding" that reduces the growth and development of legs, likely as a means of enforcing their reliance on pants to walk. Due to the massive size (and possibly weight) of their heads, it's possible that their vestigial back legs are used as counterbalance when utilizing their arms in locomotion.

Sligs are seen consistently wearing masks, mostly because upper management regard Sligs as so ugly they are forced to wear masks, otherwise they would simply refuse to work with them.[1]

Sligs as a whole are lazy, violent, cruel, and dull minded. Sligs are also very social; enjoying sports, gambling, card games, and hunting. They often become envious of one another, as they are easily impressed by higher ranks or better equipment than their own. Sligs tend to live only 20 Oddworld years.

Most sligs fire a type of assault rifle to kill opponents. In most games this assault rifle resembles a pump-action shotgun, but in Munch's Oddysee and Soulstorm, the standard Sligs' guns more heavily resemble an assault rifle.

Sligs in their most basic form, aside from the mask. These Sligs move around by crawling on their hands and are completely harmless to anyone until they get a hold of pants or a flying harness.

These Sligs use a flying harness instead of the usual mechanical pants to patrol facilities in hard to reach places. They come equipped with a grenade launcher on the back.

Slacker Sligs are given the most basic of equipment, usually just a pair of mechanical pants and a bat. Because of their overall weakness and their lack of weaponry, they are often easily outnumbered.

Bouncer Sligs are a tougher variation of the slacker. A little tougher to be taken down, but still only armed with a baton which makes them a threat at close range.

This most commonly seen variant of the Slig carries an automatic firearm and is used as the main security force to guard large facilities owned by the Magog Cartel.

Some bouncers may be equipped with full body armor, making them considerably tougher and harder to take down. In close range, this makes them a significant threat even with support of Tomahawkers.

In Oddworld: Munch's Oddysee, some Slig Poppers are on occasion given full body armor, making them considerably tougher and more dangerous.

When given many doses of steroids, Sligs grow into large beefed-up killing machines. Walking around on custom made four-legged mechanical pants to support their weight and often seen carrying the Blitz Packer automatic firearms.

The most dangerous and elite of the Slig hierarchy. Only the most accomplished of Big-Bros would sport wearing full body armor to turn them into an unstoppable force.

In Soulstorm, walking Sligs and flying Sligs can both be found using the same weaponry.

Sligs wielding a more streamlined Shock Rocker Club in the shape of a baton. They are close-combat specialists meant to put down escapees. They are the only walking Slig type to not have a flying varient. They wear collanders in the style of tin-foil hats, which prevents possession and hrugs off Abe's make-shift weapons.

One of the more common Slig variety, Shotgunner Sligs lug around a pump-action shotgun. This weapon is able to kill all in one hit, granted that all of the individual bullets strike their mark.

Slig marksman armed with a laser-sighted sniper rifle. These Sligs stand above the rest as having outstanding aim and accuracy. They can pick Abe off at incredible distances with only a single shot.

Heavy duty Slig Spec-Ops armed to the teeth with awesome firepower on par with Big-Bros. Minigunners lug around a minigun and carry a large ammunition pack to give it impressive suppressive fire.

Close-quarter Spec-Op Elites. These Sligs are pyromaniacs who love setting things alight, lacking the average Slig's fear of fire. Devastating at close range and hard to lure into a trap, they are formidable adversaries.

The most powerful type of Slig short of a Big-Bro, these Rocket toting Sligs carry a Rocket Launcher for anti-tank purposes.

Sligs are always encountered wearing variations of masks. The masks are supported by breathing apparatuses as well as areas to provide vision.

The Heads Up Display Visor or H.U.D. Visor was a variant that was extremely common during the years that RuptureFarms was active. The H.U.D. Visor has a built-in red visor that functioned as a H.U.D. Display with a scanner that was used in order to identify members, employees, and slaves of the Magog Cartel. The visor eventually became obsolete as it had no depth perception.

The Slig Pilot Mask variant features built-in red lens goggles which are used protect a Slig's vision from natural elements and debris. The Pilot Mask is sported by all variations of Slig. However, they are more common among Flying Sligs. The mask earned its name due to its leathery appearance and its slight resemblance to real World War II aviator masks.

Sligs wear armor in order to enhance their lifespan a while longer in the midst of combat. There are currently four types of Slig armor. Standard, Heavy, Big-Bro and Heavy Big-Bro. The standard slig armor consists of the mask only, whilst heavier slig armor covers the entirety of the slig.

Unknown to those ignorant, or scared, of asking - Sligs actually have names. They in fact earn them in the crèche, after graduating from Slaughter School[2]. It's also a sign of status, not all sligs have earned the right to publicly be called such. Some sligs have no names and are instead referred to by rank and or purpose that he fulfills in society [3] 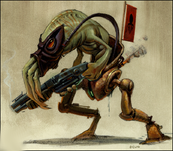 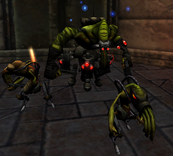 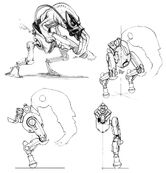 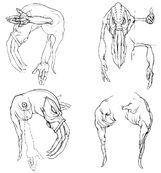 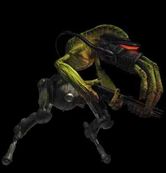 A pantsless Slig as seen in Dear Alf #73 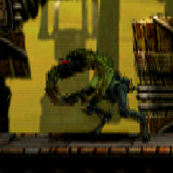 A Slig in Abe's Exoddus (PSX)

Sligs as depicted in a cutscene for Soulstorm.