Least Concern
Slegs are similar to Slogs, only with tusks and skin that has a purplish hue rather than the reddish color of a Slog. They appear in Oddworld: Stranger's Wrath. The Stranger first encounters them when he enters Buzzarton. They are vicious creatures, which can pack a punch, and serve as both the Outlaw's and Wolvark's vile pets. Slegs are scattered around the Mongo Valley as well. They may somehow be related to Slogs by ancestry or evolution, but are broader and taller than their fellow Slogs. There is a mother Sleg around the Mongo Wilds which the Stranger must defeat in order to learn the Sleg call. 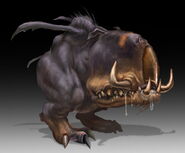 Rendered Art of a Sleg from Stranger's Wrath

Concept Art of a Sleg