A reclusive Outlaw informant hiding in the first portion of the sewers of Buzzarton, Skuz has a grudge against the two-timer, Packrat Palooka. He gives Stranger a very saucy password which will allow him passage into Packrat's hideout. He is one of the only Outlaws in the game who you cannot capture.

Scuz is an outlaw who is a dirty dealing double agent that would give out information about his fellow outlaws if he thinks it would benefit himself. He is a bit of a potty mouth and grammar is not one of his strengths. Scuz is known to hold a grudge against Packrat Palooka, who double-crossed him in an unknown way.

Skuz wears the same attire as any other minion shooter; he has a spiked helmet that reveals his eyes. He is equipt with an outlaw minion shooter gun that doubles as a pickax for melee. 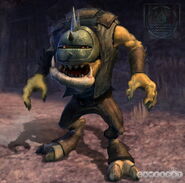 Rendered Art of Scuz outside of the sewer in Buzzardton
Add a photo to this gallery
Retrieved from "https://oddworld.fandom.com/wiki/Skuz?oldid=22545"
Community content is available under CC-BY-SA unless otherwise noted.