Lorne Lanning
Sekto (also known as Mr. Sekto or the Sekto Demon) is the owner of Sekto Springs Bottled Water Company and the true antagonist of Oddworld: Stranger's Wrath, based at Sekto Springs Dam. Sekto likes to collect Steef heads, and has an impressive collection Within his office atop Sekto Springs Dam. The native Grubbs often refer to him as "Sekto Demon" for reasons that are only partially known.

Sekto is a member of the parasitical Oktigi species of the Octigi family. Using the Olden Steef as a host body, the parasite used his victim to create Sekto Springs Dam on the Mongo River. Sekto employed the aide of the Wolvark race to maintain his facilities along the Mongo River, and banned the native Grubb race from fishing in his waters.

After successfully completing all bounties in Buzzarton, Stranger is told of a bounty for Steef heads by the Bounty Store clerk. When Stranger asks what the job would pay, the clerk puts him on the phone to Sekto, who agrees to pay Stranger 20,000 moolah in exchange for bringing in a “fresh” Steef head. However, after concluding the call, Sekto calls D. Caste Raider, informs him of the bounty, and then offers the same deal.

After Caste Raider is killed by Stranger, Sekto begins to move his Wolvark forces against the remaining Grubb settlements along the Mongo River. Fortunately, Stranger aids the Grubbs by repelling their attacks in Dusty Hollow and Last Legs. Sekto then orders the entrance to his Dam locked.

When Stranger and the Grubb forces break into the Dam, Sekto begins broadcasting threatening messages over the Dam's speaker system, and sends his Gloktigi "pets" to attack Stranger.

As Stranger breaks into his office, Sekto sends his remaining Gloktigi bodyguards against him, asking that they preserve his head as he has a "special place" for it on his wall. After Stranger defeats the Gloktigi, Sekto declares that he will now kill the Steef himself, and activates a large machine. However, he defeats Sekto after a long battle.

Stranger holds Sekto's unconscious body up in triumph right before the Dam begins to fall. In the aftermath, Stranger discovers the truth - that Sekto was in fact using the Olden Steef as a host the entire time. As Stranger and the Grubbs mourn over the body of the Olden Steef, Sekto (now reduced to his octopus-like body without a host to control) watches from afar, before swimming away into the Mongo River to escape. 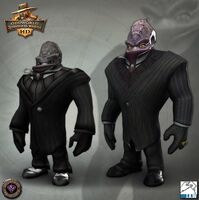 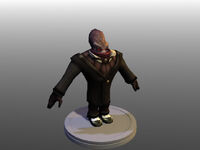 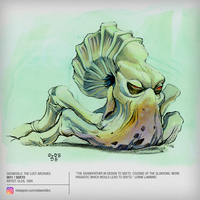 Sekto within his parasitic form design. 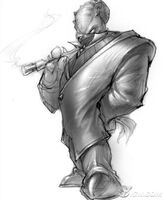 Sketch of Sekto sporting a tuxedo