Omnivore of the Deep

Least Concern
The Sea Rex is a sea creature that was planned for Munch's Oddysee but was cut from the final version. The Sea Rexes are believed to be a kind of an omnivore. According to information found on the Oddworld website, Sea Rexes are large, seabound organisms. They have a large eyeless head, a mouth full of sharp teeth, limbless body about the size of their head, and a long, flat sort of tail. [1] [2]

There have been rumors of a "Deleted Scene" of Oddworld: Munch's Oddysee, where a school of Gabbits swims when being preyed on by a Sea Rex. 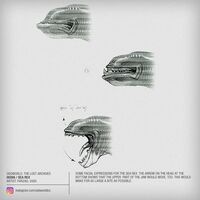 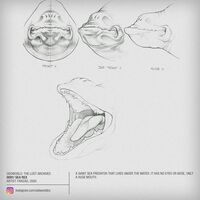 Profile Views of a Sea Rex with character designs and so forth.