Recovering
Scrabs (SKERAH-BUH) are one of the most feared cold-blooded forms of wildlife in Oddworld.

Description in Art of Oddworld Inhabitants[]

Scrabs are sacred animals nearly hunted to extinction as Magog Cartel food product, specifically Scrab Cakes. These natural beasts can be found from Scrabania to the vast wilderness regions of Mudos. Scrabs run free in deep valleys and protect the Scrabanian Temple.

The Scrab is the sacred animal of the ancient Mudanchee tribe and are among the most feared predators in Oddworld. They are feared to the point that even Fleeches avoid all possible contact with them. They are generally found in both Scrabania and Necrum's Mudanchee Vaults. They serve as the guardians of the tombs in the Mudanchee Vaults in order to repay the Mudanchee for their unwavering care and respect for them. The mark of the scrab is one of the two sacred markings required for a Mudokon to harness the power of Shrykull.

Scrabs are large centauroid pseudo-arthropods with large claw-like beaks for heads supported by a human-like torso. Scrabs have four crab-like appendages as legs which they use when traveling great distance. Their legs are also used to trample or kill prey prior to pecking and tearing away meat from the bones. Despite lacking arms, Scrabs do retain a rudimentary shoulder girdle, bearing prominent pectoral muscles and shoulder blades. Scrab's red-yellow skin tones are reflective of the desert climate of their homeland. Territorial by nature, Scrabs will fight with fellow Scrabs to the death to show their dominance over other Scrabs or nearby lifeforms. When fighting another Scrab, both Scrabs completely ignore all forms of life including prey and other threats until only one Scrab is left alive. It can be noted that Scrabs don't have eyes, thus they cannot conventionally see, but instead sense the electrical fields affected by objects and the creatures around them. When standing idle, they tend to let out small barks or howls before moving to new locations. Scrabs don't fight other Scrabs unless they are not a member of their pack. When engaged in combat with another Scrab, the two combatants appear to be spinning in a violent manner in which both Scrabs unleash frenzies of hits onto their opponent until only one is left alive as the victor. The defeated Scrab is then stomped and trampled on, before being left to rot away or eaten by other animals. Scrabs are mainly found roaming the cliffs of their homeland, Scrabania. However, they can also be found wandering throughout various areas of the Mudanchee Vaults in the jungles of Necrum, the Mudokon city of the dead.

According to Alf, owner of Alf's Rehab and Tea, they navigate by sheer sense of hunger.

(click on the thumbnails to view inactive animation thumbnails)

The Scrab as it appears in Munch's Oddysee HD 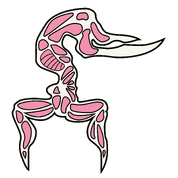 A close up on the previous image. Note the detailed patterns on the lower jaw. 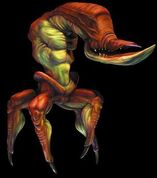 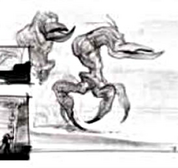 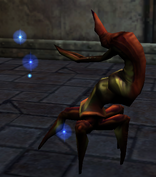