The Ratz are a small, gray-ish, one legged rodent species with glowing green eyes. They seem to be present all over Oddworld, as they appear briefly in many cutscenes of Munch's Oddysee. They act as the Almighty Raisin's eyes and ears, investigating industrial factories and reporting information, for the Raisin himself is too large and heavy to do so. Therefore, the Raisin knows nearly everything that happens around Oddworld. They have also been known to help adventurers in need, if one is wise enough to read the signs they give. For example, it can be seen in the opening cutscene for Munch's Oddysee that many Ratz run away from Munch's side when the Vykker Pod comes. It can be assumed they kept him company overnight.

Ratz appear to only have one body segment on one limb, and it is assumed all bodily functions are done inside this segment. They have large glowing eyes and large noses to assist in collecting information in the dark as well as the light. They also have small tails, which emerge from their upper backs. Their singular leg bifurcates into two feet at the ankle, which splay to the sides for traction and balance. 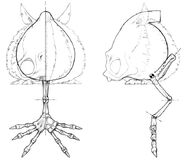 Anatomy of the Ratz Species 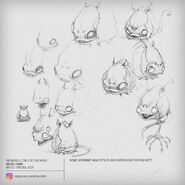 Concept Art of the character designs for the Ratz used in Munch's Oddysee. 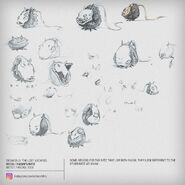 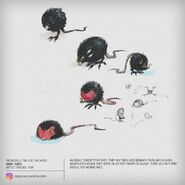 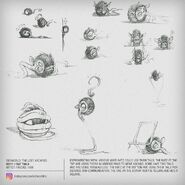 Concept Art and Early Varying Designs of the Ratz used by the Almighty Raisin.
Add a photo to this gallery

A Rat scouting out an area within the Vykkers Labs for the Almighty Raisin.

Ratz surrounding their boss, the Almighty Raisin.
Add a photo to this gallery
Retrieved from "https://oddworld.fandom.com/wiki/Rat?oldid=24297"
Community content is available under CC-BY-SA unless otherwise noted.