Endangered
The Paramites (PAR-AH-MYGHT) are one of the many forms of wildlife in Oddworld.

Description in Art of Oddworld Inhabitants[]

Paramites are natural beasts who make their home in the Paramonian Temple. While they look harmless enough, Paramites are a feared enemy among Oddworld's caves and catacombs. These carnivorous creatures are pale in color due to the lack of sunlight. Muscular forearms help them scurry on the ground and climb massive webs. Their six appendage, claw-like mouth is extremely deadly.

Paramites are native inhabitants of the Paramonian Forests. They are the sacred animals of the ancient Mudokon tribe known as the Mudomo. In Necrum, they reside in the Mudomo Vaults, which is a burial site of the ancient Mudomo tribe. The mark of the paramite is one of the two sacred markings required for a Mudokon to harness the power of Shrykull.

Abe running away from a gang of paramites

As with many other examples of Oddworld's wildlife, Paramites were prized by the Magog Cartel as a food source, and millions were processed into Paramite Pies at RuptureFarms. Apparently incapable of breeding in captivity, they were instead hunted almost to extinction until the intervention of Abe.

Paramites are four-legged, slow, sluggish pseudo-arthropods with a six-fingered hand-like appendage serving as their head. Like the Scrab, they have no eyes or other recognizable facial features aside from a fanged mouth situated in the hand's "palm". However, they're able to detect prey through a sense of smell and by vibration. The crab-like front legs are much more muscular and powerful than their back set, lending them an odd swaggering gait when in motion. The back legs are smaller and defter, so that they may spin and manipulate the silk and webs which they can produce from their abdomen. All ten of its digits are tipped with deadly keratinous claws. Although unassuming at first glance, the Paramite is a powerful carnivore, able to kill most creatures with just a single swipe of its muscular head. Their ability to produce webs, as well as their dexterous upper-body, allows them to traverse sheer terrain, and climb their silk and webs. The drab green color of their hide speaks of their preferred habitat in rainy forests or dank caves. Despite their spider-like appearance, they possess vertebrate-like characteristics as well, having a prominent ribcage, shoulder girdle and spinal column.

Paramites are intensely social creatures who always nest and hunt in large groups. Their habitat has caused them to prefer to nest and hide in high places, waiting patiently in their webs for prey to appear below them. Although not sapient, they are quite intelligent and have evolved a language of sorts, conveyed via by grunts, squeals, screeches and clicking or snapping the many joints of their head fingers. One Paramite can call upon other Paramites to perform quite complex tasks by simply "asking".

When found on their own, Paramites are docile, retreating from any creature which they encounter, following them if the creature itself falls back, maintaining the same distance for as long as they can. This is not an act of submissiveness; Paramites are never found entirely on their own, and always lead creatures foolish enough to enter their territory into an ambush. Once backed into a corner, or found in packs of two or more, they become extremely aggressive. Their fast speed and small stature allow them to follow their prey under low obstacles and stay on their trail - unlike the Scrabs, who are usually too large to travel underneath small obstructions. Since they often reside within dark areas, such as the the aforementioned Paramonian Temple and Mudomo Vaults, they can become more dangerous as they are able to hide within the upper corners of any room, and then suddenly drop below via web.

However, despite all of this, they can be easily distracted with any chunk of meat. Abe often uses this to his advantage: tricking an entire swarm of Paramites into activating switches for him, or positioning one into a hazardous spot so it can easily be killed.

The Paramite as it appears in Munch's Oddysee HD. 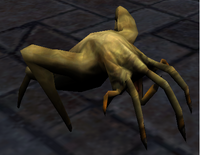 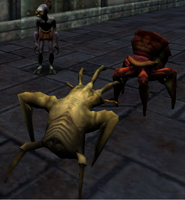 A Paramite from Munch's Oddysee roaring at a Scrab

A Paramite possessed by Abe 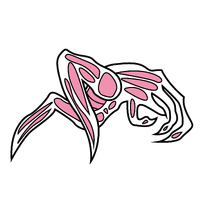 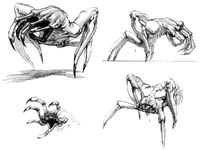 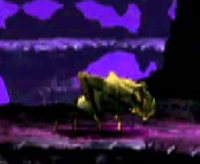 A Paramite in Abe's Exoddus (PSX)

Abe running from a pack of descending paramites. 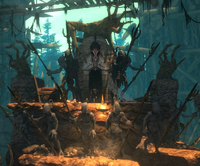 A tribute to the paramites made by the Mudomo at the top of the Paramonian Temple.