Oh, goin' after Packrat Palooka, are you? Well, you ain't never gonna bust into his junkyard until you learn the top-secret password...

Packrat Palooka is a hunchbacked Outlaw boss with glowing, pupil-less eyes. Before the events of Stranger's Wrath, he double-crossed a former Outlaw friend named Skuz in some unknown way and is responsible for stealing Eugene Ius's technology. Little is known about him, though he has taken up residence in a well-fortified junkyard. Skuz gets a bit of revenge on Palooka by revealing the password to the junkyard to Stranger. Stranger seems to think little of his name, remarking, "What kind of name is Palooka, anyway?" randomly if the player uses game speak. To defeat him in the game, you can use either Boombat or Fuzzle ammunition to knock him off the platform.

Packrat Palooka started his days loving the smell of rubbish, where he stationed his hideout in the Buzzarton Junkyard. He's a packrat and collects a lot of junk to further expand his base of operations; usually by stealing it from various places. With his engineering skills, he is also decked out with an AS-P5 chain-loading mortar cannon, capable of devastating damage.

Life isn't just all about shooting and fighting for him. When not robbing people and terrorizing the Clakkerz. he often moonshines himself as a distinguished artist. Palooka usually uses the junk within his hideout to make his art as well as reinforcing his army. He often decorates his hideout with little statues and such. However, this leads to ultimately more junk within his base of operations, known as the Junkyard.

Packrat Palooka quickly started militarization of his hideout; with this, he started using his engineering skills to reinforce his Outlaw posse. This lead to the fast firing Cyborg Semi-Auto or the dangerous Cyborg Flamethrowers. The Cyborg Semi Autos being decked out with incredible speed and strength to combat enemies; while the Cyborg Flamethrowers, such as Gunter "Sparky" Von Fahrenheiten, have had their arm replaced with a flamethrower and being his prestigious personal henchmen.

Not much is known about his relationship with Skuz, except for the fact that Palooka double-crossed him. Skuz retreated to the Sewers and later is found by Stranger and tells him the password to the gate of Palooka's Hideout.

After the burglary of Eugene Ius's computer, which has the town's secrets within it, Palooka has gained the power of shutting it down within his fingertips. He also uses it to reroute the power to make a shield around himself to protect him from intruders.

Within the duration of this boss battle, Palooka is protected by his shield, which is generated by the towers using power on either side of his platform. With this, Palooka also takes the chance to fire missiles at Stranger. Luckily, the Junkyard provides cover for the bounty hunter with fences that can block the damaging explosions of the Packrat's missiles. There are Thudslugs, Bolamites, and Stingbees provided within the area in the back sections. For one to get Palooka down from his platform, one would have to hit the four surge activators within the two generator towers with a charged Zappfly. This will lead to the shield being temporarily offline and leaving Palooka vulnerable. If one does not act fast enough, he can quickly turn his shield back on via restarting the laptop while you cannot reach the platform.

Once one knocks out Palooka's generator, the Outlaw Boss will activate progressive security levels throughout the boss fight. Within the first level, it starts out with him just firing his homing missiles at Stranger. On the second level, after restoring power to his generator, he will also activate giant grenade launchers on either side of the area. It is best to destroy these with either Stingbees or Boombats quickly so they won't take away one's health to fast. Along with the two grenade launchers, one would also have to take out the Outlaw Minions deployed on either side of the doors within the stage, these being Outlaw Shooters. Palooka deploys these due to the fact to slow one down when trying to hit his 4 surge activators again. It is advised to stick to the corners of the fences within the shooting of the Outlaw's missiles to be safe from all the various explosions. The next step of security, if one gets Palooka's health halfway down, is an Outlaw Flamer that comes to attack Stranger. Finally, the last step of his security is Palooka himself, who will drop down from his platform at one-fourth of his health left to take you on.

In the events of capturing Packrat Palooka Alive, it is extremely difficult due to the fact that his health is so low to start off with. One would almost entirely have to use Zappflies throughout the course of the battle, with the occasional Fuzzle to distract him from restarting Eugene Ius' laptop. This becomes more difficult as he starts to shoot missiles at one's self, making Stanger having to duck for cover and regain his health by shaking it off. One must be patient and shoot fully charged Zappflies at the Outlaw Boss; it is heavily advised that one should not let him get too far away or he will restore his stamina faster than one can take it away.

In the events of capturing Packrat Palooka Dead, it is extremely easy but still proven difficult due to the amount of security the Outlaw has. However, it shouldn't be too hard due to the fact that if one sticks to damaging ammo, such as Boombats or Stingbees, he should be dead pretty quickly due to his low health, to begin with.

The bounty at the Bounty Store located in Buzzarton states that if you capture Packrat Palooka alive, you would get an estimated payment of $800 in Moolah.

The bounty at the Bounty Store located in Buzzarton states that if one were to capture Packrat Palooka dead, one would get an estimated $300 in Moolah. 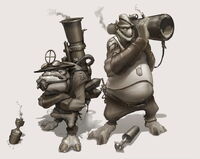 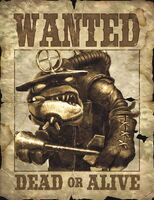 Packrat Palooka talking to a minion regarding the computer. 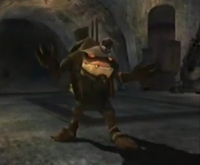 Packrat Palooka about to turn on his shield after Stranger appears before him.

Packrat Palooka after he activated his shield, protected up on his platform.

Rendered Art of Packrat Palooka with his Mortar Missle 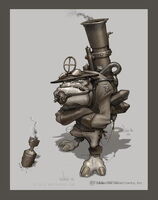 Retrieved from "https://oddworld.fandom.com/wiki/Packrat_Palooka?oldid=22738"
Community content is available under CC-BY-SA unless otherwise noted.