Least Concern
The outlaws are a group of races native to Western Mudos that doesn't fit into either the industrialist or native lifestyles. The one definite thing that they all seem to have in common is their unwillingness to abide by the law. They loot, plunder, and steal for a living while using intimidation or violence to get away with it. They mainly prey on the weak Clakker race by simply hijacking abandoned or occupied facilities as well as destroying and looting their caravans.

The outlaws, while a gang faction, also are a generic classification for several different creatures. Most outlaws have a sly and tough look, while their skin is usually gray or light green. Outlaws usually have hair, but rarely have it on their faces. Living life away from civilized people gives them a rugged barbaric speech and attitude. Supposedly, there are five-or-more species within the outlaws, appearing in Western Mudos. Despite the physical differences, it's believed outlaws can interbreed with outlaws of a different species, much like dog breeds can interbreed and create unique dog types.

Five subspecies are seen within the game:

These races are bound to the lifestyle of crime. Occasionally, some semi-friendly outlaws can be found in towns, usually in bars spending their stolen Moolah on drinks. Outlaws are organized into gangs, each controlling various territories and all answering to one gang leader, though often gangs will cooperate with each other to achieve a larger goal. Outlaw gangs are also very nomadic and will move their home or base around the land. A female outlaw can have a lot more young than a normal human would without seeming to suffer serious health problems (as evidenced by Jo Mamma and her large group).

The Outlaws use a range of technologies in their unlawful schemes. Asides from the weaponry they buy from retailers or construct themselves, they are known to enjoy operating heavy machinery such as cranes, forklifts, bulldozers, and pile drivers. The source of this technology isn’t known. Their facilities use the same lifts and mine carts that Clakkers use, or the same activator panels that both Clakkers and Wolvarks use. Some Outlaw types, typically Semi Auto and Flamethrowers, have large parts of their body removed and replaced with machinery. Packrat Palooka is known to do this to produce his premier henchmen, while Elboze Freely seems to be a fully-functioning cyborg.

A Concept Art of an Outlaw 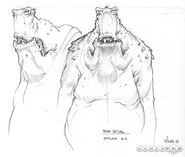 Concept Art of an Outlaw Species type, seems to resemble the same species as Blisterz Booty and Booliz Booty

Blisterz Booty standing in front of an Army of Outlaws, ready to bring havoc upon Western Mudos.

Concept Art of Outlaw Types, The Bottom One looks like D. Castle Raider

Concept Art for an Outlaw Gang within Western Mudos