Oddworld Adventures II is a video game created in 1999 for the Game Boy Color by Oddworld Inhabitants, GT Interactive and Saffire as a sequel to Oddworld Adventures. The game is a scaled-down port of Abe's Exoddus, though is much more faithful to it's origin title than Adventures was to Oddysee, with multiple different environments, a wider array of hazards, and Mudokons that can be rescued.

The game contains GameSpeak actions, but unlike its predecessor, this game has hard commands to use. There are three different characters that have their own individual GameSpeak actions: Abe and a possessed Slig or a Glukkon. Each one of the aforementioned characters have four GameSpeak actions, activated by pressing and holding the A-button and then pressing a directional button on the D-pad. Just like its predecessor, the game does not have a save option, but instead a five letter password to record one's progress, including the total number of Mudokons saved.

Like in Oddworld Adventures, chanting is activated by pressing and holding the Select-button. If there is nothing to possess on the screen, Abe will make a grunt, indicating that there is currently no use in trying to chant in that area. Abe has the ability to sneak in the game, but unlike in Oddworld Adventures, sneaking is now activated with a quick tap on the Select-button. Tapping the button activates a "sneak mode" (complete with a small sound effect), while a second tap turns off sneaking. 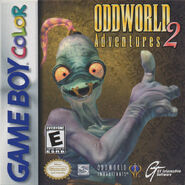