Oddworld Adventures is a video game created in 1998 for the Game Boy by Oddworld Inhabitants, GT Interactive and Saffire. The game is a 'demake' of Abe's Oddysee due to the Game Boy's limitations, and the game is massively shortened to just one area, the Paramonian Temple. A sequel was later released, known as Oddworld Adventures II, mostly based off Abe's Exoddus, and with many improved elements over the original.

Though Adventures is based on Abe's Oddysee, it lacks almost the entire story. The game's plot is based around Paramonia and the Paramonian Temple, with Abe tasked to complete the Paramonian side of the Mudokon trials of Shrykull, followed by reuniting with Big Face. The only other Mudokon present in Adventures aside form Abe and Big Face is a single Mudokon that Abe must sing a password to so he can detonate several Land Mines in one of the levels; this is the only time where GameSpeak is used.

The game contains GameSpeak actions, though they are used only in a single puzzle in the game, and there are only four, as the Game Boy has far less buttons than the PSX controller. The four GameSpeak actions are farting, a high whistle, a low whistle and chanting. Instead of having a save option, the game has a five letter password feature.

In this game, chanting is activated by pressing and holding the Select-button. If there is nothing to possess on the screen, Abe will make a grunt, indicating that there is currently no use in trying to chant in that area. Abe still has the ability to sneak by pressing up on the D-pad while moving left or right.

In the game, Abe is much quicker than in Oddysee, which sometimes makes it harder to time jumps or quickly maneuver him to a wanted spot. 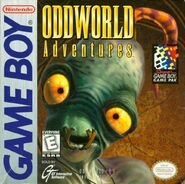 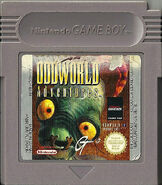