Oddworld Wiki
Register
Don't have an account?
Sign In
Advertisement
in: Articles in need of sources, New 'n' Tasty

Oddworld: New 'n' Tasty is a full HD remake of Oddworld: Abe's Oddysee. It first released for the PlayStation 4 on July 22, 2014 in the United States and July 23, 2014 in Europe.[1] It was later released for Windows, MacOS, SteamOS, Linux, PlayStation 3, Xbox One, PlayStation Vita, Wii U, Nintendo Switch, iOS, and Android.[2] In a tweet posted by Limited Run Games in January 2016 it was announced that New 'n' Tasty would be released on physical media, most likely in limited numbers.[3]

New 'n' Tasty, like all games in the Oddworld series, is set on the planet Oddworld and the continent of Mudos. Industrial growth by the Magog Cartel has consumed much of this continent's natural resources, with the industrialists always looking for more ways to fill their wallets.

The story of the game is largely the same as in Abe's Oddysee. Abe is a Mudokon slave worker in the Glukkon owned meat processing plant RuptureFarms. He is pretty happy with his life, scrubbing floors and having recently been awarded employee of the year, when one night he catches a glimpse of a Glukkon board meeting. Profits of the company have steadily been dropping because the wildlife used for the company's meat products has slowly started going extinct. Luckily there is still an untapped source of meat available; Mudokons. Abe runs for his life, avoiding security and successfully fleeing the factory only to be confronted with the revelation that he is the savior of his people.

Abe is tasked with completing a series of ancient tribal trials before being rewarded with the power to break back in to RuptureFarms. Not only to rescue his fellow Mudokons, but also to shut the factory down once and for all. Abe eventually manages to kill the majority of the Glukkon board members, but is captured by Slig security soon after.

The game has two different endings, depending on how many Mudokons are saved over the course of the game. If more than 150 Mudokons are saved from RuptureFarms, they will come to Abe's rescue just in time to save him from the meat grinder he is dangling above.

If less than 150 Mudokons are saved over the course of the game, they will not care for rescuing Abe and leave him to his fate.

In June 2012 Oddworld Inhabitants announced that the game would not be a remaster of the original PlayStation title, but a remake built from scratch with 2D gameplay and 3D graphics, using the original as a blueprint. The remake was described by series' creator Lorne Lanning as "basically Oddworld: Abe's Oddysee being redone in a 3D physics engine as a 2D side-scrolling platformer," stating the developers "are not trying to reinvent any wheels."

GameSpeak has been increased to include more variances of the same basic greetings and messages, though Abe begins with the original's basic gamespeak and evolves his speech as the player progresses throughout the game.[citation needed] The Quiksave feature that appeared in Oddworld: Abe's Exoddus makes a return, allowing players to save their progress at almost any point. The checkpoint save system from the original has also returned, but with the frequency increased so that the most any player has to redo upon death is a maximum length of three screens. The cross save functionality has also been implemented for PlayStation systems.Co-op mode also makes a return. It allows multiple players on separate controllers to take over gameplay when one player dies.

The game's secret areas and puzzles are in the same place as the original, but were altered slightly to suit the scrolling screen. Some secrets have been expanded, others redesigned with new environments, and some entirely new to the game. Shrykull power has been changed so that multiple charges can be kept, but stepping through a motion detector will cause Abe to lose the charges.

New 'n' Tasty features three difficulty levels: Easy, Normal, and Hard. Difficulty influences the amount of grenades, rocks or meat Abe receives at any given time, as well as the reaction speed of Sligs and the blinking speed of UXBs. The set difficulty also influences the amount of health, indicated by a halo of birds, Abe has. On the easy and medium difficulties this means that Abe can take some slight damage from gunfire and other hazards before dying. The hard difficulty is essentially the 'classic' experience, where one hit instantly kills Abe. Health can be replenished by sending Mudokons through bird portals or chanting when birds are near.

Two pieces of DLC were added to the game on all platforms. 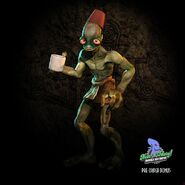 Alf, as he appears in Alf's Escape.

In July 2010, Just Add Water announced that it was working on a new Oddworld title by releasing the following statement in an interview with IGN:

While we cannot go into specifics right now, we can tell you that over the coming weeks and months, we will be announcing these exciting projects starring all of your favorite Oddworld characters. It’s almost symbiotic in that when something moves forward on any of the projects, we just start chatting about new items, or what if we do this. We're all extremely excited to breathe life into the Oddworld universe and indeed to let it breathe life into us.

Lorne Lanning officially announced the game would be a complete HD remake of Abe's Oddysee with a similar story and gameplay. Cutscenes are rendered in real-time and are entirely built from the ground up using the original designs as a blueprint, but using none of the original's final assets to cut corners. The developers were given full access to Abe's Oddysee's source code, as well as design concepts, maps, and tools used in the entire production of the original game.

Images tweeted by the developers and first footage released at Eurogamer Expo on September 30, 2012 revealed the game would be presented in 2.5D (2D gameplay with 3D visuals) and had abandoned the original's flip screen aspect in favor of continuous scrolling, which dramatically changed the gameplay. In the original, the player could reset a screen's puzzle or AI by returning to the previous screen and then re-entering the current one. With real time screen streaming, the developers needed to find a new way to reset enemy AI. Gilray stated that they had discussed the idea of giving players the choice of playing the updated game with the original's style of flip screens. He explained that the game was to have two modes. A classic mode, "which plays like the original game does, but still scrolls;" and 'New 'n' Tasty Mode', which has control refinements and puzzle tweaks. The plans included a platinum trophy in the PlayStation versions for competition of both modes. The plans for the two separate game modes were eventually dropped.

Back in 2011, Just Add Water shared a teasing image of a blurred whiteboard that was used to brainstorm ideas for New 'n' Tasty, which was in the pre-development stage at the time. The only words not blurred out on the picture was the game's working title: Abe HD. On October 3, 2016, over two years after the release of New 'n' Tasty, JAW shared the unblurred image of the whiteboard, giving a glimpse into all the early ideas that never made it into the final game.[4] A couple of items on the board that stand out:

Abe being captured by Sligs

Abe during his job as a floor waxer 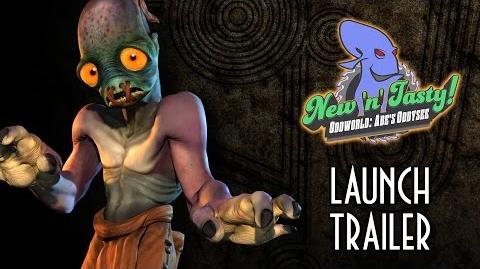 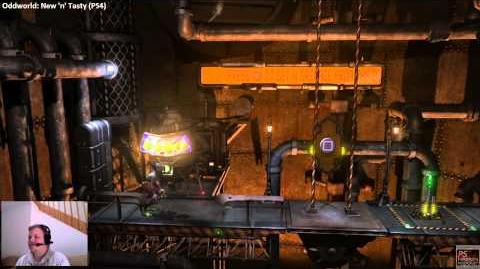 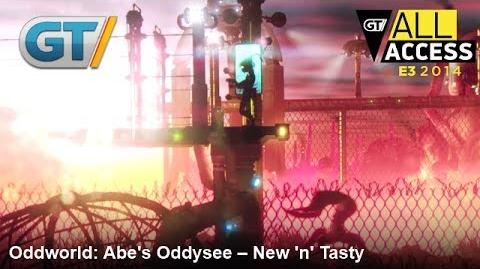 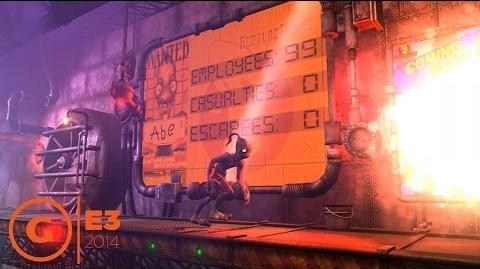 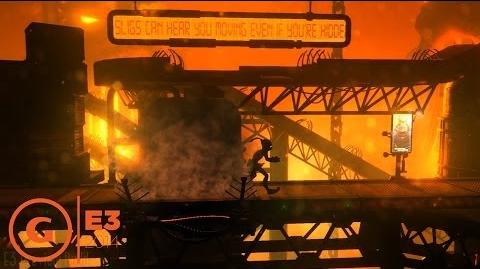 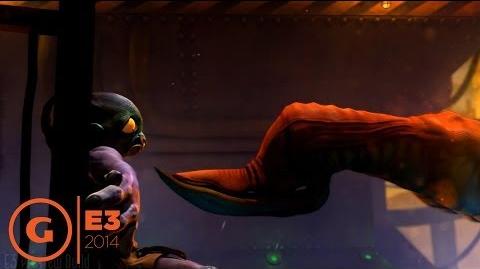 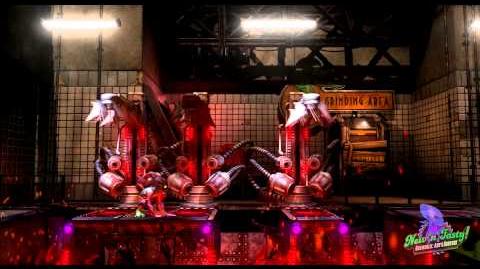 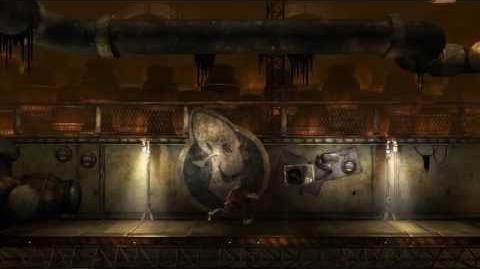 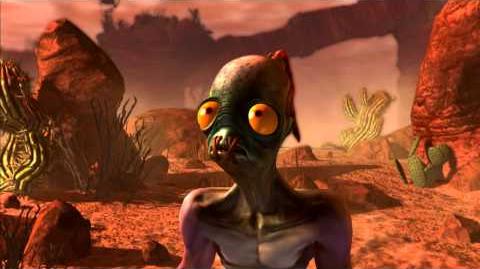 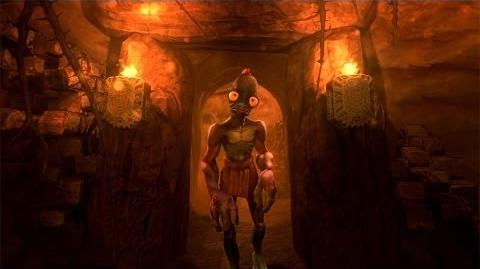 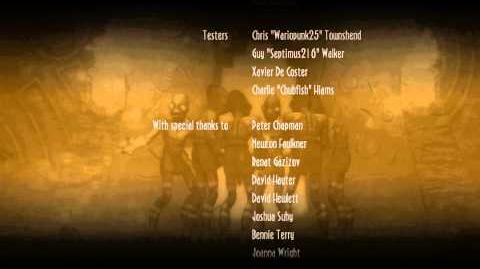