The game was announced together with Oddworld: Stranger's Wrath HD in a tweet made by Just Add Water.[1] It was released on the Playstation 3 and Playstation Vita on December 19, 2012 in Europe and on December 24, 2012 in the United States. On June 8, 2015 Oddworld Inhabitants announced that Munch's Oddysee HD would also make its way to mobile platforms and PC.[2] While the actual HD version never made it to mobile and PC, the original version of the game was eventually ported to mobile platforms, and the PC version received a significant update that included higher quality models.

On February 23rd, Limited Run Games released a physical version of Munch's Oddysee HD, as well as a collectors edition that includes printed artwork, the game's soundtrack and a themed soda can.[3]

On March 9, 2012, a picture of Munch's Oddysee being played on a PS Vita was posted on the official Oddworld Inhabitants Facebook page.[4] The game was also intended for a released on the Xbox 360 but is currently labelled as Cancelled.[5] 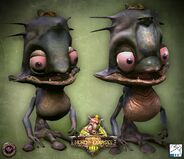 Retrieved from "https://oddworld.fandom.com/wiki/Oddworld:_Munch%27s_Oddysee_HD?oldid=23448"
Community content is available under CC-BY-SA unless otherwise noted.