Playstation Network
Oddworld: Abe's Oddysee is a cinematic platform game developed by Oddworld Inhabitants and published by GT Interactive. It was released in 1997 for the PlayStation, DOS, and Windows 95. The game was released in Japan for the PlayStation under the title Abe a GoGo by SoftBank, with a Japanese PC version following in 2001. A GameBoy port was made of Abe's Oddysee, retitled Oddworld Adventures, which was developed by Saffire Corporation and published by GT Interactive in 1998.

Abe's Oddysee is the first of the five planned games in the Oddworld series. A remake titled Oddworld: New 'n' Tasty was developed by Just Add Water Ltd. and released on digital download platforms in 2014.

Abe's Oddysee is a 2D side-scrolling platformer in which the player takes control of Abe and has to guide him through numerous puzzles. Obstacles come in the form of mines, electric barriers, pits and patrolling enemies. If Abe comes into contact with any of these obstacles it means instant death and he will start over at an earlier checkpoint. The player has an infinite amount of lives, there is no game-over.

Aside from navigating puzzles and obstacles, a major element in Abe's Oddysee is the rescuing of Abe's co-workers; enslaved Mudokons that work in the factory just as he does. Abe may talk to his fellow Mudokons and use a series of voice commands to direct them to bird portals, which allow the Mudokons to escape the factory. The number of Mudokons Abe saves (or kills) over the course of the game decides the final ending of the game.

Abe has the ability to 'possess' the Slig security guards that patrol the factory by chanting. By doing so he may use the Slig to explore ahead or solve parts of puzzles that would otherwise be unreachable. Abe can only chant if no chant suppressors are nearby, as doing so will electrocute (but not kill) him.

In the later stages of the game Abe receives the ability to transform into the Shrykull, a powerful demigod that is able to shoot out bursts of lightning and destroys any hostile objects or enemies on the screen. This state can only be used for a few seconds at a time, however, and first has to be powered up by rescuing a certain number of Mudokons at once.

Abe, like most Mudokons, is a slave working in the biggest meat processing plant on Oddworld known as RuptureFarms. While recently awarded the title "employee of the year", he now hangs helplessly over a meat grinder as he narrates the story of what happened the previous day.

Abe performs his duties as a floor waxer late one night, passing posters on a wall advertising the products the factory makes. Meech Munchies by now are no longer available, due to Meeches having been hunted to extinction. Paramite Pies and Scrab Cakes were still being made, though. And even a new product was announced as "Something New 'n' Tasty". Abe doesn't understand where the sudden source of new meat would come from, though he would soon find out.

A door opens behind him and Abe gets to have a glimpse of a Glukkon board meeting. Molluck presents a series of steadily declining profit charts, with Scrabs and Paramites becoming more scarce by the day. After a moment of outcry from the board members, Molluck presents his plan to increase profits; a new product with Mudokon meat. A projection on the screen depicting a Mudokon head on a stick titled Mudokon Pops sends Abe into a panic attack and he instantly feels the need to escape the factory, lest he ends up in a meat grinder.

A camera in the factory captures Abe running away and a Slig is sent to kill him. Abe's destiny is unknown to him, until he finally escapes the clutches of the processing plant to find the full moon out in the sky. He notices a Mudokon hand print seamlessly imprinted into the moon. But before he can figure out what it means, he falls down a cliff, hits his head, and lays on the ground in a daze. A Mudokon with a great tribal mask covering his head, known as Big Face, appears before Abe in a vision. Abe is told of how he's destined to become the Mudokon savior, but in order to do so, he must first complete a set of spiritual trails through the Monsaic Lines and the Monsaic Temple. With completing the trails within the the forests of Paramonia, deserts of Scrabania, and the Temple itself, Big Face bestows twin hand scars onto Abe. On one hand represents a Paramite and the other a Scrab. With both scars, Abe is able to become an all-powerful demigod known as Shrykull.

Abe makes his way back into RuptureFarms, avoiding security and infiltrating deeper into the factory, until he is back at the boardroom where it all started. The final group of Mudokons who Abe sends home leave him with a Shrykull charge, which he then uses to kill the RuptureFarms board members. After the dust settles, two Sligs are dispatched and Abe is knocked out and captured.

As his story of the previous day concludes, Abe is again seen hanging from his hands above the meat grinder. Molluck enters the room together with a Slig who activates the meat grinder below him. Molluck then gives the order to drop Abe into the grinder.

How the game ends from this point depends on how many Mudokons were rescued during the course of the game.

If Abe rescued at least 50 Mudokons or more the good ending will play and the Mudokons will come together to chant, summoning a thunderbolt to strike down on Molluck and his Slig assistant just in time to save Abe. Big Face then appears, chants and warps himself and Abe out of RuptureFarms and onto a stage in front of all the Mudokons Abe saved. This ending is considered canon and the events of Oddworld: Abe's Exoddus pick up directly after this.

If Abe rescued less than 50 Mudokons the bad ending will play and Abe will hang over the meat grinder while the Mudokons discuss if they should even bother saving him. Big Face asks the opinions of a number of Mudokons, but they ultimately decide he's not worth saving and allow Abe to be released into the grinder. Molluck and his assistant laugh as Abe is chopped up in to little bits.

The first footage creator Lorne Lanning saw of Abe's Oddysee involved a pack of Meeches chasing Abe. He was happy with the animation, but due to disk space limitation, they were not able to include all species, thus Meeches were cut. In addition, a sequence that concerned the moon that Abe witnesses after his escape from the Stockyards was also cut. In that CG sequence, Lanning explains that it was originally accompanied by footage of a meteor shower creating the shape of Abe's handprint, in order to imply "greater forces that are really behind it, that are trying to send him symbols". Due to little time and budget constraints (the budget was 4 million dollars), that sequence was cut as well.

Abe's Oddysee was the first major GT title that the UK development team, which had been taken in by GT following the acquisition of Warner Interactive, became involved with. Due to lack of testing, the final version of the game had some glitches, such as the 'Stop Turn' glitch, in which Abe can jump backwards behind screens, as well as an invincibility glitch and a floor glitch. These glitches allow the player to skip levels, such as Paramonia and Scrabania. The glitch was first discovered in 2014 for the Microsoft Windows version of the game. Another type of invincibility glitch was found in the remake. However, both the floor glitch and the 'Stop Turn' glitch were fixed.

During development, an executive at GT Interactive tried to sabotage the game's development, because he didn't like the idea of the game being made. His boss was shown the footage, and he decided to fund it in the expense of the executive who decided to shut it down. Lanning explained that during Oddysee's production, people in the video game industry were seen as making toys and not taken seriously. At the time, games began being more about shooting, violence, and blood, but Oddworld Inhabitants was "the antithesis to that", and said that "we can make people feel better rather than just feel like they won."

An alternate version of the game was released in Japan. While the storyline remained unaltered, the packaging of the game and the designs of the characters differed from the original version. One of the main changes of the character designs was the removal of a finger from four to three fingers; certain Japanese pressure groups were offended by the Mudokons having four fingers, due to a historic Japanese subclass of meat packers who were looked down upon in society. Four fingers, or showing four fingers to another person, came to insinuate the other was a member of the subclass, because it had become symbolic of the meat packers who frequently had work-related accidents.

Another key change was the rework of the Mudokon Pops graphic used in the game, the international version was changed heavily in the Japanese release due to an incident within the country around the time of the games development. The reworked graphic went on to become a staple across the series with the Japanese version being used for the product in future Oddworld games such as Oddworld: Stranger's Wrath HD and Oddworld: New 'n' Tasty.

On January 29th 2011, the development of a high definition remake of Abe's Oddysee was confirmed. The game, titled Oddworld: New 'n' Tasty, was developed by Just Add Water Ltd. and was released on the PlayStation 4 on July 22, 2014. 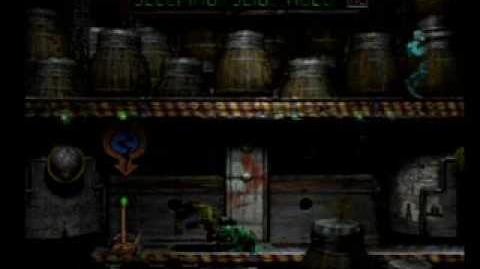