Abe's Exoddus expands on the original gameplay of Abe's Oddysee by introducing a number of new features such as calling multiple Mudokons at once, being able to save at any point in the game and possessing a wider selection of creatures.

The game opens with the poem:

"His scarred hand branded on moon's odd face, this hero may free the Mudokon race. With skin of blue and spirit guides too, only he can save our bones from brew. But shall he fall to Glukkon yoke, Mudokon nation... BE DOOMED TO CROAK."

Straight after the events of Abe's Oddysee, the story begins as Abe is welcomed back at Monsiac Lines to celebrate the 99 Mudokons he had just saved from RuptureFarms. When Big Face pats him on the back a little too hard, Abe falls down the platform, hitting his head. Whilst he is unconscious, three spirits known as The Three Weirdos appear to him in a vision. The Three Weirdos tell him how the Glukkons are mining for bones on ancient Mudokon burial grounds to produce SoulStorm Brew and ask for Abe's help. He then wakes from his vision and gathers a group of 5 Mudokons to search for Necrum.

While they are travelling the desert searching for Necrum, some of the Mudokons get tired and fed up and of course, blame Abe for it. As the Mudokons are about to call it quits, a Glukkon train races past over their heads. Upon realizing that the train carries bones, they immediately follow it straight to Necrum. Upon arriving, Abe slips and becomes separated from his friends. After exploring the mines and being reunited with his friends, the group stumbles upon a SoulStorm Brew vending machine. The Mudokons, thirsty from their trip through the desert, welcome the cold beverage, even though Abe after discovering that the brew is made from their Mudokon bones warns them of the possible side effects of a Glukkon produced product. But regardless the Mudokons chug down all 99 bottles of the brew, making them extremely ill. Being unable to help, Abe continues through Necrum Mines, eventually finding the mine's boiler installation. After overloading the boilers, the Necrum Mines are destroyed in the explosion and Abe is hurled out into the jungles of Necrum, here he must pass the ancient trials of the Mudanchee Vaults and Mudomo Vaults and earn the healing power given to him by The Three Weirdos.

After passing the rigorous trials Abe finally obtains the healing ring power from the three weirdos and tell him to destroy SoulStorm Brewery the source of the brew. Abe then enters the FeeCo Depot and goes on another challenging journey by using a FeeCo Train and goes to locations such as the Slig Barracks which you can guess what enemies you'd facing there for the majority of the level. Abe manages to get past all of the Sligs and possesses General Dripik the commander of the entire barracks complex and uses him to disable the first half of the electrical gate preventing Abe from entering the brewery. Abe then kills the glukkon and leaves Slig Barracks once and for all and heads to the Bonewerkz facility where the bones of his Mudokon brethren are processed and then put into the brew. Abe, as usual gets past the security and possesses the glukkon in charge known as Director Phleg who has quite a temper on him but only towards Abe for continuing to ruin the glukkons plans. Abe uses him to disable the second half of the gate and kills him. Abe then proceeds to enter the office of Vice President Aslik, gets past the heavily guarded areas and possesses Aslik and gets him to disable the final part of the electrical gate then kills him afterwards. Abe then goes to the SoulStorm Brewery and discovers the second ingredient of SoulStorm Brew, liberates the remaining mudokons working there and goes through many difficult areas but in the end he manages to accomplish his goal and destroys the entire brewery by tampering with the boiler resulting in it exploding in a epic explosion of fire killing all remaining glukkons and sligs inside the facility. Abe then gets greeted in a very enthusiastic manner by his mudokon friends. Alf then gives a talk about his first brew while Abe does an empowering narration on how him and his mudokons are going to find and free the remaining slaves which leads into Munch's Oddysee.

Since the game runs on the same engine, the gameplay in Abe's Exoddus is largely identical to that of Abe's Oddysee. Only a few extra features were added to the gameplay.

In addition to Sligs, Abe is now able to possess other creatures as well, including Scrabs, Paramites and Glukkons. After drinking SoulStorm Brew he is even able to possess his own farts. New types of puzzles are designed around the possession of these creatures.

The new Quick Save option allows the player to save the game at any point they wish, instead of having to wait for a checkpoint (which can often be few and far between).

If Abe saves at least 150 Mudokons or more, Brewmaster will be shown surrounded by boilers in front of a gauge, his assistant Slig crawling away, pantsless. The boilers then explode, killing Brewmaster and destroying SoulStorm Brewery in the process.

Abe then appears far away from the factory, surrounded by the many overjoyed Mudokons he saved. Alf is shown starting Alf's Rehab and Tea, giving a speech to the Mudokons.

Then Abe and many other Mudokons are shown placing their paws up to the moon in rememberance of all the Mudokons that are still out there. The last M.O.M. video plays. If all Mudokons are saved, a screen telling Abe congratulations appears, followed by the credits.

If Abe saves less than 150 Mudokons, Abe will appear in front of the same gauge where he will meet a few Mudokons who, enraged by his inability to save the other Mudokons, stopped the boiler from exploding. They knock him out, only for him to wake up restrained in a Tear Extractor.

Brewmaster orders his assistant Slig to turn up the gauge to the highest level to make the finest brew ever. Consequently, Abe is killed by the overflow of electricity and is transformed into a flock of birds. Shocked by Abe's sudden death, Brewmaster eventually regains his senses and ends the game with some maniacal laughter.

Additionally, if Abe killed all possible Mudokons, a message from the Glukkons will appear informing Abe of his excellent service. He will be dropped back at the beginning of FeeCo Depot, and the player may play through the rest of the game with invincibility. After this, only the above bad ending is possible. 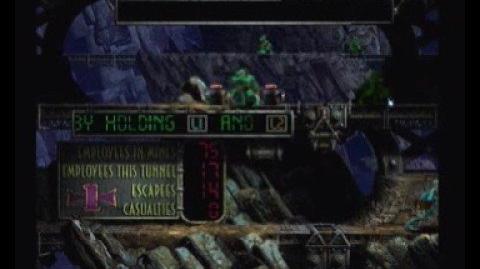