The Mudokons are a highly spiritual race who are native to the continent of Mudos. They were once considered the supreme race on Oddworld, before being enslaved by the Glukkons. The majority of the Mudokon population is now born in captivity and are forced to work in Glukkon factories.

Mudokons are greenish-blue humanoids with turtle-like facial features and four fingers on each hand. Mudokons are known to have evolved from birds, thus, explaining their agility, frail bone structure, and feather-like hair. Due to their avian origin, it's likely that Mudokons possess hollow bones. Mudokons have the ability to alter their skin-tone to reflect their current mood; angered Mudokons turn a reddish hue, overjoyed Mudokons turn yellow/green, and depressed Mudokons turn blue. Mudokons are oviparous and come from eggs produced by the Mudokon queen, Sam. Mudokons are also known to live a lifespan of roughly 40 years. In addition, they are the only species in Oddworld to bear a close resemblance to humans. According to Alf, most Mudokons (with the exception of queens and male drones) are infertile and are most likely incapable of reproducing.[1] Despite evolving from birds, Mudokons are shown to have teeth and, like birds, they have a gizzard for further digestion.

For centuries, the Mudokons were the supreme race of Oddworld. The Mudokons were known for their prowess above all of the other races and species in Mudos. Centuries prior to becoming an enslaved race, the Mudokons excelled in religion, art, philosophy, politics, architecture, and military. Thousands of years ago, the Glukkons were said to have been close allies of the Mudokons. After a long period of peace, a moon appeared in the skies of Mudos which the Mudokons proclaimed to be known as the Mudokon Moon.

Shortly after the appearance of the Mudokon Moon, the Mudokons established an omen which declared their species as the Chosen Race. Outraged by this, the Glukkons closed off their relations with the Mudokons. This event marked the beginning of a period known as the Age of Alchemy in which the Glukkons tried to disprove the Mudokon belief of being the supreme species. During the Age of Alchemy, the Glukkons formed their own isolated society in which they spent their lives indoors and refused to see the sky or accursed Mudokon Moon that disgraced them. As time passed, they gradually abandoned their spiritual ways until they became one of Oddworld's most prominent industrial races.

As Glukkon society continued to flourish, the Mudokons started to work with the Glukkons in creating the forerunners of the products manufactured today. Over time, the Mudokons were belittled or oppressed by their Glukkon collaborators and became a species enslaved by their former allies. During their enslavement, the majority of the Mudokon species forgot their long-treasured heritage. The structures that remained from the once proud Mudokon race are either abandoned, being reclaimed by nature, or desperately being maintained by the few Mudokons who still practice their ancient traditions.

The Rise of the MessiahEdit

Within the confines of the Glukkon food processing plant RuptureFarms, a single young Mudokon had a revelation after years of unquestioned loyalty to the Glukkons. The young Mudokon was known as Abe. Abe was waxing the floors of a corridor and stumbled upon leaked information from the RuptureFarms' CEO, Molluck, and fellow officials in the conference room. The Glukkons claimed that they were in danger of bankruptcy, due to the decline in RuptureFarms product sales caused by a decrease in healthy livestock. As a desperate last resort, Molluck unveiled a new product called Mudokon Pops, a new meat product made of Mudokon meat. Shocked by this discovery, Abe made it his goal to escape RuptureFarms. Upon escaping RuptureFarms, Abe met a native Mudokon shaman known as Big Face at the Monsaic Lines. Big Face stated that Abe was the Messiah who had returned to restore the Mudokon way of life outside of slavery and tsave the rest of the Mudokons from RuptureFarms. He then told Abe that he had to pass a Mudokon test of fate, which required him to travel through the Scrab homeland of Scrabania and the Paramite homeland of Paramonia. After passing these tests, Big Face was convinced that Abe was the Messiah and branded his hands with the mark of both creatures; giving him the ability to transform into Shrykull, one of the Mudokon demi-gods.

After the destruction of SoulStorm Brewery, the Mudokons started to gradually rediscover their once lost heritage. Though their society and culture hasn't achieved the grand scale that it was once recognized for, the growing race managed to successfully establish most of their lost religion as well as the associated traditions. With the help of the native population of Mudokons led by Big Face, the Mudokons began to train spiritual successors of the once fearsome Mudokon warriors including Mudarchers and Tomahawkers. Once their race gained a stable foothold as a new-found civilization, Abe and a group of his many followers established the Mudokon Resistance[citation needed].

Mudokons can have five different conditions exclusive to Oddworld: Abe's Exoddus, adding a challenging obstacle when Abe tries to rescue them.

An angry Mudokon can be identified by the red hue on their skin. If Abe smacks an angry Mudokon, it will immediately strike back. They will smack other nearby Mudokons and operate traps, hampering the player's progress. Angry Mudokons won't follow Abe until Abe tells one that he's "sorry", in that it will no longer be angry and follow Abe's orders. Normal Mudokons can get angry if Abe unjustly hits them.

A wired Mudokon can be identified by their slap-happy, erratic behavior and yellow-hued skin. These are Mudokons that have been exposed to laughing gas. While wired, these Mudokons will follow Abe no matter what. However, they will hyper-actively run around and be hard to manage, making sneaking by enemies impossible. They can be calmed by hitting them once, after that, they will no longer be wired; unless they're exposed to laughing gas again.

A depressed Mudokon can be identified by their sharp-blue hued skin. Mudokons can either be discovered this way or will become depressed upon seeing another Mudokon getting killed, including Abe. They will not follow Abe's orders, so Abe must tell a depressed Mudokon he's "sorry" to snap them out of their depression. However, striking a Mudokon in this state will turn it suicidal, and it will constantly hit itself until it dies unless Abe uses the "sorry" command to stop it in time.

A sick Mudokon is the least common type of the five. They can be identified by their sickly green-hued skin. There are only two known factors that can cause Mudokon sickness; drinking the highly addictive Soulstorm Brew, or being left in a Tear Extractor. Their sickness negates the ability for them to do anything at all, and they must be cured by Abe using a healing ring given to him by a shaman. This first occurs on the five Mudokons that followed Abe to Necrum at the beginning of Abe's Exoddus and doesn't occur again until Abe reaches Soulstorm Brewery. They can be slapped but all it will do is make them do a "Sad" groan and kneel back down. Trying to talk to them will just make them groan and grip their heads.

A blind Mudokon can be identified by their greyish skin. Because of their blindness, they can't simply follow Abe the way Mudokons normally can and have to rely solely on well-timed voice commands that Abe gives out. Poorly-timed voice commands could have a blind Mudokon wandering into hazards. Despite their blindness, they will run straight into activated bird portals (though can comically run into a wall before doing so). Like normal Mudokons, the can become angry, depressed, sick, OR wired.

There are two new native warrior Mudokon types exclusive to Munch's Oddysee that are capable of combat. Because their homes are where Abe finds them, they do not need to be rescued with bird portals. These Mudokons types can either be found how they are or can be transformed or upgraded with Spooce.

A Tomahawker is a melee-fighter capable of doing a good deal of damage to enemies with its club weapon. They will fight enemies when Abe commands it, or if they encounter threats on their own. Normal native Mudokons can be upgraded into Tomahawkers, which can be further upgraded to Mudarchers, provided there's enough Spooce to do this. 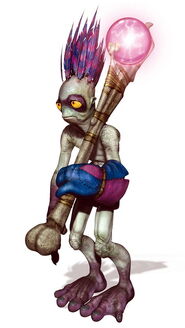 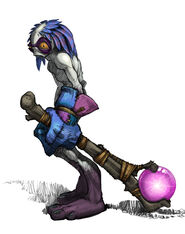 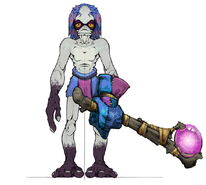 A Mudarcher is an elite Mudokon capable of ranged combat - doing damage that's very effective against armored enemies. They will fire at enemies when Abe commands it, or if they encounter threats on their own. Mudarchers can be upgraded from Tomahawkers, provided there's enough Spooce to do this. 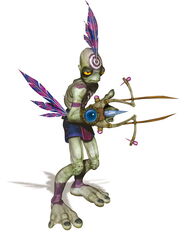 Rendered Concept Art of a Mudarcher 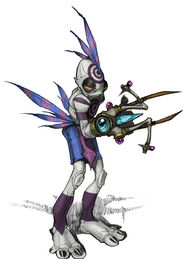 Concept Art of a Mudarcher
Add a photo to this gallery

Scrubs are the enslaved Mudokons that are still held at the Glukkon Businesses and establishments. These Mudokon prisoners sport a prisoner outfit and have tedious tasks no one would want to do. These Mudokons can be saved by Abe to earn good Quarma; to save them from their horrendous jobs.

A Shaman is a servant to the Almighty Raisin in Munch's Oddysee. This Mudokon can be found guiding Abe and Munch on their journey by saying tips and such to help them on their adventure. He teleports to the protagonists via Shaman Circles.

Mudokon religion revolves around nature and the spirits all around them. The native landscape is very sacred to the Mudokons and some will put down their lives for it. Along with nature worship, some tribes are known to worship certain wildlife. For example, the Mudomo worship the Paramites and the Mudanchee worship Scrabs. However, Mudokons are also known to worship individual figures such as the Almighty Raisin seeing him as being the embodiment of wisdom and Shrykull seeing him as the embodiment of strength.

Mudokon society depicts a naming system uncommon to others. Mudokons, being a race with little contact with a motherly figure, name each other when the time calls for it, sometimes based off of descriptive features they possess (such as Big Face and the Three Weridos) or possibly after sounds or grunts (although this is uncertain), such as Abe and Alf. 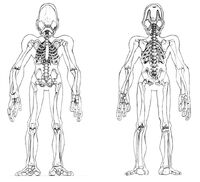 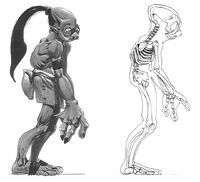 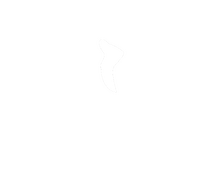 Cave painting of mudokon with firearm. 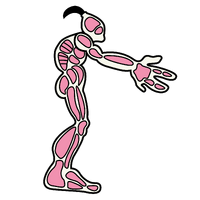 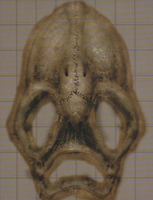 Mudokons comforting each other, waiting to be rescued. 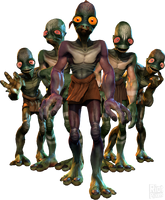 Retrieved from "https://oddworld.fandom.com/wiki/Mudokon?oldid=22745"
Community content is available under CC-BY-SA unless otherwise noted.