Moolah is a currency used around the industrialized areas of Oddworld, as well as many of its cities. In Oddworld: Soulstorm, Moolah can be collected by Abe. It can then be spent at vending machines to buy crafting materials.

In Oddworld: Munch's Oddysee Abe and Munch are tasked with forcing wealthy Glukkons to donate their life savings into the Lulu Fund. They then use the Moolah to buy back the last remaining can of Gabbiar at an auction.

In Oddworld: Stranger's Wrath the Stranger can collect Moolah by completing bounties on wanted outlaws and turning them in to the Bounty Store. Bounty targets can be killed, but will yield twice as much Moolah when turned in alive. Aside from the bounty targets, random outlaws that the Stranger encounters will also drop Moolah upon being killed or captured. Clakkerz, while friendly, also drop small amounts of Moolah when hit.

Before meeting with Doc, the Stranger can spend his earned Moolah in a General Store to buy various upgrades to his gear and abilities.

In Oddworld: Soulstorm Abe is able to find Moolah in containers. The Moolah can then be used to buy crafting materials or keys from vending machines.

Chest of Moolah bills and coins 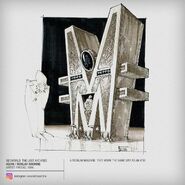