The Mongo River is a long and mighty river that runs across Western Mudos. At its head lies Sekto Springs Dam, where Sekto makes his office. Along the Mongo River lie many Clakker settlements and a few minor Grubb dwellings. On the side of Mongo River is a Clakker city called New Yolk City. When the Mongo River was drained, it became the Mongo Valley but that is until Stranger with the help of the Grubbs destroyed the dam and freed the water, returning the valley to its former state.

Concept Art of the Mongo River 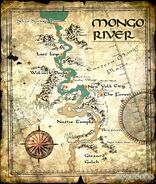 Map of the Mongo River