Molluck the Glukkon was a representative of the Magog Cartel. He was the Chief Executive Officer of RuptureFarms 1029 and SoulStorm Brewery 401. His labor force consisted of many Mudokon workers, notably the liberator Abe. Molluck is the main antagonist of Oddworld: Abe's Oddysee and Oddworld: New 'n' Tasty.

He is shown to be a cruel, yet pragmatic manager, devising cost-effective solutions to combat against plummeting sales, such as the unveiling of Mudokon Pops, RuptureFarms' most recent tasty treat.

When the Mudokon worker Abe instituted a mass breakout of the RuptureFarms labor force and proceeded to shut down the entire meat-processing plant, Molluck was held fully accountable. He was also blamed for the subsequent insurrection that swept across Eastern Mudos. Though he has since disappeared into hiding, Lady Margaret desperately wishes for him to be found so he may stand trial and explain himself to the Magog Cartel's investors.

The Pursuit of Profit Edit

An up and rising star of the Magog Cartel, Molluck was offered the position as CEO of RuptureFarms, an outlying franchise in the middle of nowhere. Dedicated to the pursuit of profit and wealth, he took the position and continued to amass not only his coffers, but his status within his Glukkon family. After experiencing moderate success, Molluck also became the CEO of the newly established SoulStorm Brewery, where production on SoulStorm Brew soon followed.

When the native Meeches were hunted to extinction, and both Scrab and Paramite numbers began turning up thin, Molluck began to compose a survival strategy for RuptureFarms that would not only rectify his dwindling profits, but also appease his investors. This saving grace would only be known as "New 'n' Tasty" until the final product was unveiled. Soon, the catchy name and alluring teaser poster proved enticing, especially to the Mudokon labor force. Molluck's impulsive drive to succeed was what inevitably convinced him to patent the concept of Mudokon Pops, which would be fashioned from the flesh of Mudokons.

The Truth is Out Edit

During the RuptureFarms Annual Board Meeting, Molluck unveils his Mudokon Pop concept to the Board of Executives, and is lauded for his ingenious decision, which will no doubt save the franchise from bankruptcy. Unbeknownst to the Board Room, however, lowly Floor Waxer and Employee of the Year, Abe the Mudokon, was eavesdropping on the meeting and bears witness to the macabre concept.

Security cameras witness Abe fleeing the Board Room, and Molluck orders any renegade Mudokon attempting to flee to be shot on sight. All digital advertisement boards are turned over to Abe's profile picture, and security throughout the entire factory is increased, including the deployment of several floating mines.

The Gods See All Edit

From the safety and security of the RuptureFarms Board Room, Molluck watches Abe traverse the factory floor while leading dozens of his fellow Mudokon employees to safety. As he watches, Molluck's fury swells and he begins to lose his cool composure.

Once the Mudokon fugitive manages to slip through the Stockyards and disappear out of range into the desolate Free-Fire Zone that surrounds the factory, Molluck orders even tighter security measures for fear Abe might return. The Free-Fire Zone is then transformed into a near-impenetrable barricade, and all security is placed on high alert. Despite these measures, however, Abe is able to return to RuptureFarms via the factory's underground maintenance shafts, allowing him to burrow straight beneath the Stockyards and back into the slaughterhouse.

Molluck continues to watch as Abe not only manages to avoid capture, but somehow also leads all of the RuptureFarms Mudokon labor force to freedom. He also witnesses dozens of Slig security guards being brutally murdered and, at times, the renege Mudokon appears to transform into a transient being that decimates anything that comes near. It becomes increasingly apparent that Molluck is going to be unable to put a halt to this insurrection by any ordinary means. After Abe finds the factory core, permanently shutting down all of the major power supply across RuptureFarms, Molluck decides on implementing his final solution.

The Fall of a Tyrant Edit

Molluck declares an emergency Board Room meeting so his fellow Executives will be safe, as the Board Room was one of the few areas that would be protected from the poisonous gas. An aggregation of Floating Mines were placed inside the the Board Room to protect the Executives, while several Slig guards are also stationed on the main platform.

Molluck, however, witnesses the Mudokon renegade enter the maintenance area above the Board Room and flees for his own office. A two-minute countdown is initiated, and initially unbeknownst to Molluck, Abe is able to enter the Board Room, where he transforms into Shrykull, detonating all of the Floating Mines, obliterating the Slig security, and turning the entire Glukkon Board of Executives into minced meat or blood splatters on the wall. He is also able to deactivate the poisonous gas, saving himself.

Despite this, Abe is captured by three lingering Slig security guards who barely avoided death by their own tardiness, and the renegade Mudokon is placed in a holding cell for an indeterminate time.

On a late evening some time after Abe's capture, Molluck arrives in the holding cell with a single Slig escort by his side to personally oversee Abe's execution by maceration. He wastes no time and, after lighting up one final cigar, he immediately demands for the Mudokon's execution.

Mere moments before Abe would have plunged to his violent death, a single stroke of lightning bursts into the factory, tearing through the many levels and pinpointing Molluck's Slig escort. Bewildered and utterly mortified, Molluck only has a few short seconds before he too is electrocuted by a second bolt. As he screams, his clothes are burnt away, unceremoniously revealing his feeble body to the Mudokon.

Molluck then collapses and falls unconscious as his prisoner is rescued by the Big Face. Once the two Mudokons are gone, the lightning storm continue to ravage the factory, causing several uncontrolled fires that tear through the silent slaughterhouse.

When representatives from the Magog Cartel arrive at RuptureFarms a short while later, they find the meat-processing plant utterly destroyed. However, Molluck's body wasn't located and he is declared to have died in the fire.

This, however, may not be true, as there is evidence to suggest he may still be alive and in hiding. Lady Margaret, Supreme Leader of the Magog Cartel, therefore issues a nation-wide search for the missing Glukkon, so that he may stand trial for his inability to quench a Mudokon uprising and be subsequently shot, or worse, sent to answer to the Cartel's investors, who live deep within Nolybab.

While Molluck doesn't make an appearance in Oddworld: Abe's Exoddus, he is mentioned by his fellow executives of the SoulStorm Brew project, who fear that if Molluck emerges suddenly to find the Necrum Mines also destroyed by the fugitive Mudokon, Abe, then his subsequent rage would envelope them all.

Deemed handsome by Glukkon standards, Molluck, like all other Glukkons, walked with his long arms rather than his stunted, hidden legs. Purple-skinned and red-eyed, Molluck was constantly seen smoking his cigars, which gave him disagreeable smoky breath. He was a pragmatist at heart, interested in nothing but the outcome, evidenced by his willingness to sacrifice his own workforce to supplement falling meat stock.

Despite his generally cool demeanor, he had an explosive temper, as witnessed during Abe's escape and destructive return to RuptureFarms. Before Molluck's defeat, he authorized in a rage that all remaining workers be gassed to death along with their messiah, while he and his contemporaries took shelter in the boardroom. When his plan was foiled and Abe was captured, Molluck chose to watch the messiah's execution, demonstrating a sadistic thirst for vengeance. One thing is certain: Molluck harboured a temperament worth fearing.

Wearing a simply-cut purple suit with a red shirt, gold collar and executive pin, and a pair of black-and-white spectator shoes, Molluck was geared for success as much as he could obtain it, working hard and enjoying his job greatly. With his enjoyment, Molluck also was fond of the niceties of success, from his costly attire to his penchant for cigars, of which his favorite brand was Surprisingly Swisher Sweet cigars.

For his reappearance in Oddworld: Soulstorm he is wearing a simply-cut dark grey, striped suit with a black shirt and a Stockgluk Guild medal around his neck. His skin is now a light marble grey colour, like all other reimagined Glukkons and, possibly by the Shrykull lightning, he has multiple large scars across his face, the largest going across his eye, blinding him and causing it to go white.

Molluck in the Oddworld Movie 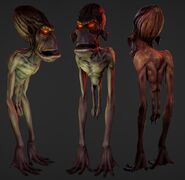 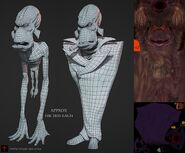 Add a photo to this gallery
Retrieved from "https://oddworld.fandom.com/wiki/Molluck?oldid=22710"
Community content is available under CC-BY-SA unless otherwise noted.