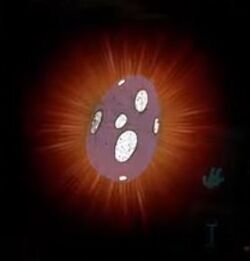 Either someone has actively milked this or it just drips naturally from the fangs of Meetle Bats. Neither option is fun to think about. Can be used to combat illness.

Meetlebat Venom are one of the many craftable items presented in Oddworld: Soulstorm.

Considered one of the several important items needed to craft the Antidote, Meetlebat Venom is the venom sac derived from the Meetlebat itself. Meetlebat's could be harvested and 'milked' or hunted down for its lucrative venom.

It is noted amongst Mudokons suffering from the unknown ailment that being bitten by a Meetlebat could alleviate it, albeit temporarily.