The meetle is a large arthropod native to oddworld

The meetle is a large arthropod native to Mudos. They were meant to have a more prominent role in the game Oddworld: Munch's Oddysee due to how their young were experimented on and how they were frequently genetically modified to create Mugs yet all of these notes remained unused in its final release.

The meetle is a large eight-legged arthropod native to Mudos. They possess a large slit-like mouth with two blunt fang structures near the base. They have a set of four large mammalian eyes that appear to close sideways. They also have a large carapace the withhold a pair of fine fly like wings. The larva of the meetle is small and pink with yellow spots along their backs and a set of four smaller blue eyes and only six legs. They also have alone feathery tendrils on the tops of their heads.

A Meetle (or Mug) larvae. 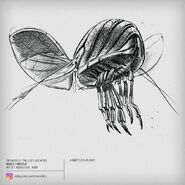 A Concept Art of a Meetle in flight. 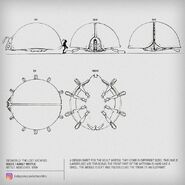 Size Concept Art of Meetle with Abe next to it for measurement. 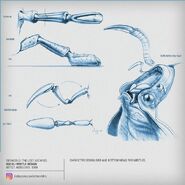 Arm and Facial Designs for the Meetle Species. 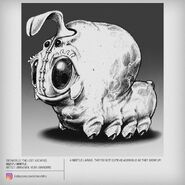 Retrieved from "https://oddworld.fandom.com/wiki/Meetle?oldid=23430"
Community content is available under CC-BY-SA unless otherwise noted.