Meagly McGraw is a boss Outlaw in Oddworld: Stranger's Wrath that was encountered by the Stranger at Beeks Opple Farm just outside of Buzzarton.

Meagly McGraw is a small guy, the smallest in his family, and he is always accompanied by his much beefier outlaw bodyguard, aptly called Tiny. He was usually picked on for being small and wanted to make a name for himself to prove those who mocked him wrong. He started gathering Outlaws from far and wide round Buzzarton and expanded his forces to prepare to attack upon the one target he cared about in the current time: Farmer Beeks' Opple Farm. You will rarely see Meagly without his right-hand man and bodyguard, who lays down his life for Meagly during the boss fight against the Outlaw Boss.

Meagly McGraw is well known in outlaw circles as an Opple connoisseur. He's a fan of the Opple pie, Opple cluster, and Opple juice. Only thing is that he doesn't much care for the Clakkerz that make all these treats. Some compare his view to those of the Clakkerz have among the Native Grubb Tribe.

One day, Meagly McGraw led his forces through Buzzarton and laid siege upon Farmer Beeks' Opple Farm. He took control and now is in charge of all of the Beeks' family's crops; dedicated himself to take pleasure within his new environment. Ever since he has been hiding out within the stolen Opple farm and has taken the daughters of the farmer hostage within the compound. He now operates the farm for trade and as a base of operations for his schemes before Stranger arrives. Though he isn't the most powerful or tactical outlaw that Stranger will face, he is still difficult to beat. His shotgun is light and has moderate power, and his bodyguard, Tiny, makes things much harder because not only is he a formidable opponent up close, but he will shoot Stranger at a distance as well.

Meagly McGraw is a short-tempered Outlaw and is often not respected by some of his Outlaw Minions. This short temper may come from being the smallest in his family; wanting for more in life and to be on top for once in Western Mudos. Meagly is a coward; stands behind his men and even bodyguard until he is confronted one on one, where he will run from Stranger in a panicked frenzy. McGraw seems to have a ruthless side as well, slaughtering all the Clakkerz that work inside Farmer Beeks' Opple Farm and even roasting one on a spit over a fire.

Meagly McCraw looks alike to the characteristics of Filthy Hands Floyd; he has a tattoo on his left bicep, where his shirt has ripped sleeves and wears leather gauntlets that have been cut around his fingers. He wears a silver ring as well as a hat that is strapped with multiple shotgun ammo bullets. He carries a wide-range, double-barreled shotgun and is hunched over.

Two in One Boss Battle Edit

This boss fight is unique from the others one may face in Stranger's Wrath because there are two bosses within this battle. One of them being Meagly McGraw and the other being his trusted bodyguard, Tiny, being McGraw's ride. Now, Tiny cannot be captured alive and can only be killed by Stranger. In this case, it is safe to go nuts against Tiny until one has killed him. There are many approaches to eliminating the bodyguard; one should be able to take him out with an ammo bag filled with Stingbees and Boombats. Thudslugs may be a good option as well, for they do an excessive amount of damage and there are some within the area of the farm. Once Tiny has been eliminated, one can now focus upon Meagly McGraw.

In the events of fighting Outlaw Bosses up to this point, neither Bolamites nor Stunkz will work long enough to incapacitate him for a bounty. Also, the Fuzzles will only damage him and lower his health, not his stamina. This only leaves one with the old Thudslug/Zappfly combo. To do this combo, knock him over with a Thudslug and follow up with a charged Zappfly to take away his stamina. One does need good aim though, for Meagly is fast and can be wily at times. Boombats do take away more stamina but also more of his health, these would be used as a backup if needed. To take his stamina all the way down, one would have to use 8-10 Thudslugs and charged Zappflies to knock him out. If one runs out of Thudslugs, there is a whole colony of them on the right side of the farm if needed.

To capture him dead, one can use any of the live ammo that they choose. However, it is recommended that one would use Boombats and Stingbees until the Outlaw Boss is dead. The only thing one might be cautious of is one's health and dodging the incoming fire from McGraw. 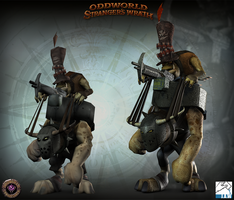 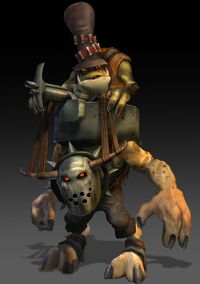 Rendered Art of Meagly McGraw on top of his trusted bodyguard, Tiny 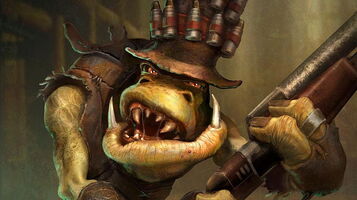 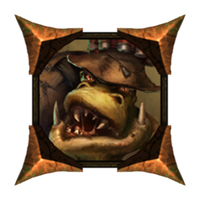 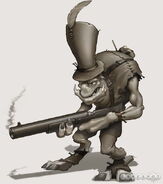 Meagly McGraw Concept Art of him holding his double barreled shotgun.
Add a photo to this gallery

Meagly McGraw holding his shotgun as he commands his minions. 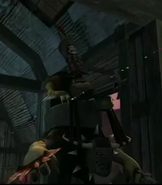 Meagly McGraw on top of his bodyguard, Tiny, during his boss fight.
Add a photo to this gallery

Retrieved from "https://oddworld.fandom.com/wiki/Meagly_McGraw?oldid=22543"
Community content is available under CC-BY-SA unless otherwise noted.