Lorne Lanning
Lulu is an extremely dull-minded Glukkon. Described as being the "most lazy, incompetent, and pitiful excuse for a Glukkon" by the Almighty Raisin, he couldn't make a single penny before Abe and Munch helped him. When he was a Pud, he made a fake charity in an attempt to draw in Moolah and attention. Almost every Glukkon on Oddworld strangely had a donation booth in their office (which rich business owners ignored). After receiving numerous donations from sponsors, Lulu rose through the Glukkon ranks from a lowly Pud to a big-time GlockStar (mostly because he received donations that previously went to the now deactivated establishments of the Magog Cartel). Lulu was put at the height of his game mainly due to Abe, who possessed Glukkons and forced them to put every coin into the fund. Lulu was later invited to a Shin Dig auction party for the last can of Gabbiar. After a long battle for possession of this rare delicacy, the possessed Lulu won the auction with a bid of 3,000,000 Moolah which ultimately put him in bankruptcy.

Lulu wears an expensive looking glittery purple zoot suit as well as a matching hat and smokes a larger cigar from what you would see from a typical Glukkon. His wardrobe is also similar to that of Tex; purple and a purple tint on his glasses.

Lulu serves as the tritagonist of Munch's Oddysee, since Abe and Munch must help him become a glockstar to get to Vykker Labs in the first place.

Lulu is possessed by Abe and forced to attend the auction of the last can of Gabbiar, which he openly expressed his reluctance to attend the event ("No way! Where'd these idiots get that crazy idea? I HATE that fishy crap!"). While possessed by Abe, Lulu wins the auction for the can with the final bid of 3,000,000 Moolah, which instantly placed him into a severe state of debt and complete bankruptcy. After he was exorcised, Lulu notified that he spent all of his money on the bid and lets out a scream so loud that it can be heard from every corner of Mudos as far as the continent's shoreline. Lulu escapes the destruction of Vykkers Labs 13, but is then implicated in the incident. He was last seen on the front page of The Daily Deception newspaper in a photo, depicting him stripped of his belongings with the exception of his GlockStar hat, which he now uses as a donation basket.

Lulu doesn't make an appearance in the Bad Ending. However, it's possible that Lulu and his Slig Valet either didn't go to the Gabbiar Auction or did go to it and not bid on the Gabbiar, thus preserving his wealth.

Lulu appears on one of the slides during the board room meeting in the opening cinematic.  He is standing next to the Rupture Farms logo wearing his pud outfit.  It is unknown why he is on the slide, though it is possible that his artwork was merely used for expository purposes and that it does not really depict him as a RuptureFarms employee.  There is a name, possibly a nickname of some sort, under Lulu's name: "Lil Lacky."

Lulu when he was a Pud

Concept art of Lulu as a Pud without his glasses 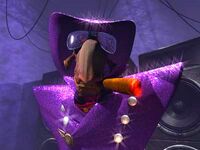 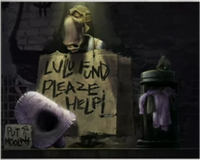 Lulu returned as a Pud

Lulu with his Slig partner within the Auction Area as Glokkstars

Lulu within his office, falling asleep as he works as a Pud.

Lulu flying upon a Blimp towards Vykker's Labs.

Lulu relaxing within his blimp cabin stationed on the Vykker's Labs Docking Station.

Lulu within the Auction Center, possessed by Abe.

Lulu standing before the entrance of Vykker's Labs with a welcome banner dedicated to him.

The face of a Gluk who just lost his entire fortune. 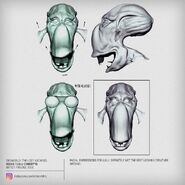 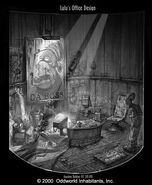 Concept At of Lulu's Office found within Munch's Oddysee.

Concept Art featuring the social classes of the Glukkons, where Lulu is displayed as a Pud