"Oh, the Looten Duke, that's who you are lookin' for. He is a feisty Outlaw Scoundrel. He is hiding out behind the Water Facility..."

The Looten Duke is a fairly large Outlaw with a Gatling gun who occupied the Gizzard Gulch Water Facility along with his gang and was taxing the town into the ground in exchange for the most precious of liquids. Stranger brings him and his gang in, freeing the Water Facility for the Clakkerz. The Looten Duke is terrified of being in jail (again) with Blisterz Booty for an unspecified reason, and Stranger taunts him with this when confronting him. Whatever the reason, it's implied to be extremely humiliating.

The name Looten Duke implies that his specialty is thievery. If so, it's possible that the large stash of treasure scattered about inside the explorable water tower behind the Water Facility plant is made up of various acts of theft on the Looten Duke's part.

Within the events of Stranger's Wrath, in Gizzard Gulch, the Looten Duke was known to be a dangerous Outlaw Leader. His enemies would fear him under his Gatling Gun, which he called "Tommy", that sprayed bullets so fast that it can kill a crowd of Clakkerz in about two seconds. He is known to be a sinister and a man who fights alone, even though he has a raging army of followers behind him.

Before Stranger bountied Blisterz Booty in jail for illegal poaching, the Looten Duke rammed his forces upon the Water Treatment Facility, taking it over and restricting the water from the Clakkerz within the town. With the control of water underneath their control, Duke's gang started to raise the price for the water, leading the Clakkerz to be short on supplies and such.

During the course of Stranger bursting in upon the operations of Duke's gang, Stranger taunts him by telling Duke about him and Blisterz Booty sharing a cell together in the Gizzard Gulch Jail. The Looten Duke acts hysterical, consumed by fear of what happened last time he shared a cell with Blisterz. This leads to Duke frantically falling back into the main building within the Water Treatment Plant, leaving his Outlaw Mortars to finish Stranger off.

After a cutscene within the game, Duke will retreat, leaving his two trusted Outlaw Mortars to fight Stranger. These Outlaws will shoot homing rockets towards the player; if one does not find cover, they will be defeated. During this fight, it is recommended that one would go up one of the ramps to either one of the watchtowers that have roofs over them. This will help you survive with no damage from the rockets. It is relatively easy to take out the one Outlaw Minions, just shoot Fuzzles their way and they will fall to the ground. Use a Bolamite on each of them so you can bag them alive for Moolah. Concentrate on taking out one of them rather than both, then in the events of running out of ammo, go to the back of the building where there are Thudslugs and Fuzzles available. After taking the two Mortars out, the Looten Duke will come out to play.

The Looten Duke will follow Stranger around all over the facility, firing his nail gun at the player. He can follow you anywhere except for the roof of his building, where the Outlaw Mortars were stationed. To head up to the roof, go inside the building and through the door, Duke came out of to confront you. There will be a rope in the back of the room, climb up it to get on the roof and recover your stamina and health.

In the events of one going to capture the Looten Duke alive, one would need to know that he is unlike the likes of Filthy Hands Floyd. Bolamites do not have any effect on the Duke, leaving him to rip them apart and be free once again. Fuzzles do minimal damage to him; don't faze him. Use Thudslugs to take out his stamina; use a combo of Zappflies to make his stamina go down even farther. Once he is unconscious, one can bag him for the full bounty.

In the events of one going to capture the Looten Duke dead, there are two different ways of fulfilling this goal. One way is to constantly hit him with Thudslugs to make him fall back into a spinning fan. The other way is to run up to the upper level on the side of the facility with the surge activator. One will have to wait behind the wooden shield to lure the Duke to follow Stranger. Then, shoot the surge activator to drop him into the spinning fans below, reducing him into an Outlaw Milkshake.

The Bounty Store within Gizzard Gulch states that if one were to capture the Looten Duke alive, they would receive $600 in Moolah.

The Bounty Store within Gizzard Gulch states that if one were to capture the Looten Duke dead, they would receive $200 in Moolah. 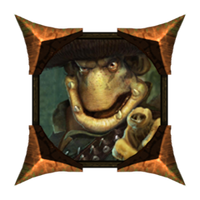 Rendered Art of Looten Duke pointing at the player with a grimace face on.
Add a photo to this gallery

Retrieved from "https://oddworld.fandom.com/wiki/Looten_Duke?oldid=22736"
Community content is available under CC-BY-SA unless otherwise noted.