Lefty Lugnutz is a wanted Outlaw poacher, illegally rounding up and selling Slegs and Sleg byproducts during the events of Stranger's Wrath.

Before the events of Stranger's Wrath, Lefty Lugnutz was a friend and partner with a Clakker by the title of "Cornjaws the Retired Sleg Hunter". It's stated that they used to work together on expeditions around the Mongo River and Mongo Wilds. Their partnership ended though, once Cornjaws found out that Lefty was selling his poached Sleg meat and captured Slegs illegally. With this, it led to a dispute over Lefty's methods and the separation of the two hunters.

After the separation, Lefty Lugnutz can be found within the edge of the Mongo River inside a Grubb Graveyard. Unlike Cornjaws, who became washed up and not a hunter anymore, Lefty found his way as an Outlaw poacher. His business is considered immoral for he hunts down Slegs within restricted areas that prohibit such activity.

Lefty Lugnutz is a stylish Outlaw compared to the other outlaws Stranger faces within the Clakker Towns. He wears a hat that resembles an Australian explorer, followed by a hunters vest and trousers. He is equipt with a backpack filled with additional hunting supplies and has a hunting rifle that he uses to round up Slegs.

In the events that one brings in Lefty Lugnutz captured Alive, the New Yolk City Bounty Store would give the person an estimated amount of $700 in Moolah.

In the events that one brings in Lefty Lugnutz captured Dead, the New Yolk City Bounty Store would give the person an estimated amount of $200 in Moolah.

Lefty responding to the fake sleg call that Stranger uses to drag the poacher out. 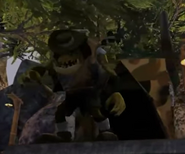 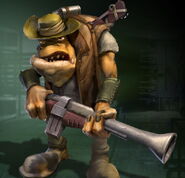