Junior Executives are low-level administrators of the SoulStorm Brewery. They are Wanna-Bes. In game, they wear green suits with black shoes. In cutscenes, their clothing is more varied. They are never seen smoking, except on the official Oddworld Abe's Exoddus Character Scale Chart.

Protection of SoulStorm Brewery was their main purpose of Junior Executives. They intended to prevent the total destruction of the brewery, having the same fate as RuptureFarms. In order to prevent such a mass destruction looking from an economical point and administration one, Junior Executives employed diverse units of Slig Guards, over 40 per region, to stop the Mudokon terrorist, Abe. The main protagonist is able to pass them by possessing them and, finally, by reaching the Main Boiler and overheating it, Abe succeeds in blowing up SoulStorm Brewery.

Well you're not pining this on me!

I demand to know who is at fault here! 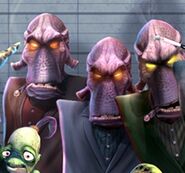 A Closeup of a Junior Executive Concept Art

Colored Variant of a Junior Executive Character Concept Art.
Add a photo to this gallery
Retrieved from "https://oddworld.fandom.com/wiki/Junior_Executives?oldid=22176"
Community content is available under CC-BY-SA unless otherwise noted.