Jo Mama is an outlaw who appears in Oddworld: Stranger's Wrath. She is the mother to a large number of the outlaws the Stranger fights throughout the game.

Jo Mama is a grouchy outlaw who is the mother of an exceedingly shocking amount of the outlaws that you encounter throughout Stranger's Wrath. She is a ruthless leader and is the only female boss character within the series.

Jo' Mamma's got a whole brood of sons protecting her while she operates her excavation operation. Stranger has got to defeat the rowdy, yet a protective group of boys and bag their momma before returning back to Buzzarton.

Jo Mama later grouped up a bunch of her sons and started excavating an old shipwreck just past the sewer in Buzzardton. She has also employed several clakkers to manage the obstacles so not everyone can just waltz right in. She later resigned to her favorite piece of machinery within the construction site, the pile driver. Within this pile driver, she would often bark out orders in a harsh manner directed to her sons. Stranger relies on the hospitality of the Clakkerz employed there to get past several obstacles. He has to swim through the stenchy water, through packs of sewer slogs and outlaw shooters, just to get to the shipwreck!

The Mark of Pain Edit

Due to the repeated cooking accidents that had occurred while trying to feed all of her children, Jo Mama's right hand has been fused with her oven mitt, melding the flesh with her cooking glove. This explains why she always wears one, not for a fashionable choice; a burden of her role as an Outlaw mother.

Jo' Mama is a loudmouth whose hormones have gone a bit off of the edge. She is very abusive towards her sons, verbally assaulting them as they do her bidding. Her relationship with her sons is not a healthy kind, to say the least. She is careless as she operates dangerous machinery around her boys, subjecting them to harm. She is grouchy and always seems to treat her brood as the dirt within the excavation pit that they currently work on. 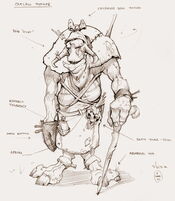 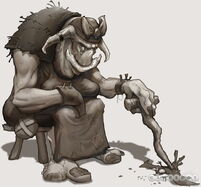 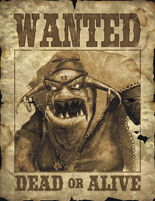 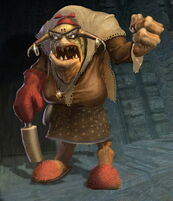 Rendered Art of Jo Mama
Add a photo to this gallery

Retrieved from "https://oddworld.fandom.com/wiki/Jo_Mama?oldid=22737"
Community content is available under CC-BY-SA unless otherwise noted.