No
Humphrey is Irwin's colleague, one of the top scientists at Vykkers Labs and one of the two main antagonists (alongside Irwin) of Munch's Oddysee. He likes to study and experiment on species of animals and genetically mutate them or implant them with devices which may aid the Vykkers in the execution of their sick experiments. Although incredibly intelligent, he is often hampered by a complete lack of common sense.

When compared to Irwin, Humphrey is more ambitious and optimistic, though just as sadistic as any other Vykker. He's always trying to "think big", though it does not always end in success. His previous endeavor involving a shampoo brightener ended up burning holes in customer's heads, but he shrugged it off, saying "no progress without risk".

He started off as a researcher in Vykkers fine foods division, being promoted to head of Snack food additives group after creating an incredibly efficient netting system, increasing Gabbit yield by 500%. From here, he created a way to convert useless toxic waste into highly profitable food preservatives. This would ultimately lead to the creation of Baby Chow, a baby food brand dedicated to serving pre-chewed food of toxic preservatives.

His latest experiment involved implanting a sonar beacon inside Munch's head in an attempt to use him to fetch captured critters back to the lab, saving time for Irwin and himself to continue research uninterrupted. This, however, ended in disaster with Humphrey failing to recognize that Munch would use this device to escape. Conclusively, however, Humphrey is ferociously intelligent and creative, making profitable margins from the most worthless of materials; a master of financial creativity.

Within the events of the Good Quarma Ending, we see that Humphrey is consumed and killed by an explosion along with his colleague, Irwin. This is due to Munch and the Fuzzles planting explosives within Vykkers Labs 13, leading to its ultimate destruction.

Within the Bad Quarma Ending, we see that Munch is recaptured by the Vykkers. This leads to Humphrey callingLady Margaret, the Glukkon Queen, and delightedly informs her that they have a fresh pair of Gabbit Lungs for her. The sadistic Vykker then sticks around and watches Irwin perform the horrific surgery on Munch, leading to the Gabbit's death. 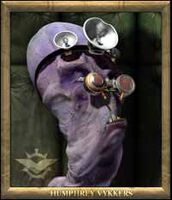 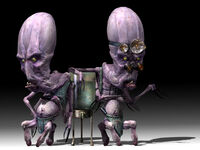 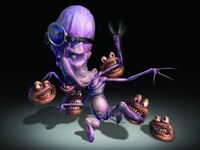 Rendered Art of Humphrey being attacked by Fuzzles. 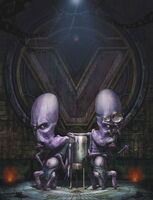 Concept Art of Irwin and Humphrey within Vykkers Labs 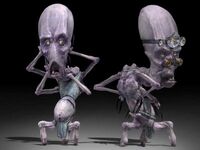 Irwin and Humphrey posing for a Rendered Art 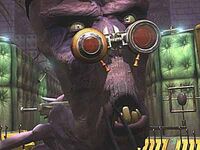 Close-Up of Humphrey within Vykker's Labs 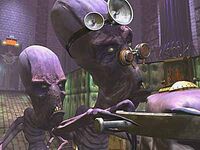 Irwin barging in on Humphrey while he attaches sonar upon Munch's head. 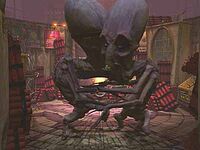