Headley was the Vykker auctioneer for the Gabbiar auction at Vykkers Labs. He sports a monocle and has an accent. So far, out of all of the Vykkers seen, Headley seems to have the deepest voice. This though, might be because of his accent.

Headley is often recognized for his role as Auctioneer of the Vykkers Labs Shin Dig Auction. However, he is also an official that specializes in social relations for Vykker's Labs with other outside companies associated with the Glukkons, which is the main reason for his unique fancy attire.

After the destruction of Vykker's Labs, it is unknown if Headley was present in the facility or if he perished in the explosion. If he was present, it would have been sheer luck if he managed to escape the sudden explosion.

Little is known about Headley, other than he is not a typecast medical worker like many Vykkers. He appears to be a cordial gentleman, with a gentle sense of humor and an urbane tone, unlike most of his snide, sadistic brethren. These traits made him an apt for choice for the Gabbiar auction, allowing him to entertain patrons and accept bids without poor reception. 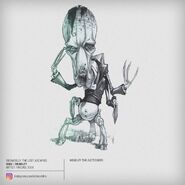 Retrieved from "https://oddworld.fandom.com/wiki/Headley?oldid=21515"
Community content is available under CC-BY-SA unless otherwise noted.