Hand of Odd is the first game in the mysterious Habitales series. Production of the game began alongside the development of Munch's Oddysee for the Playstation 2. When Munch's Oddysee swapped to the Xbox, the information feeds concerning Hand Of Odd ceased. Development of Hand Of Odd has since been confirmed as halted, not dropped (as was feared) at the beginning of 2004. In the 2011 GameCity Night event, Episode 2 Season 4 in Nottingham, It was confirmed by J.A.W and OWI that they are making a revival of Hand Of Odd. That was just one of their many confirmations about Oddworld that day/night. Also Stewart Gilray, the head of J.A.W, was holding an art book or something with the same Hand Of Odd logo on it as the original would have had.

While the game takes place on the familiar territory that is Oddworld, the game's mechanics are completely different to any previous Oddworld game. Being part of the Habitales series, the game focuses on the day to day lives of Oddworld's many diverse inhabitants. It doesn't follow one specific character like the games of the Oddworld Quintology do (with its heroes); instead it focuses on the stories of a few different characters caught in the cross fire of conflict between opposing sides. It's nature versus industry as the ambitious industrialists (or land muggers) with their masses of Moolah and dark hearts, duke it out with the eco-extremists (or Tree Huggers) with spiritual energy abundant and a clean conscious.

The fundamental principle behind the game is choice. As the player, you are given complete control over the evolution of the game's characters and environments. As a result, the game can be described as having similar functionality to that of a realtime strategy game. You build up an army of characters, have them build the areas they live in, and make them do your will. As such, the game has the potential for both a single and multiplayer dimension, in which Oddworld Inhabitants have confirmed that up to 16 players can play simultaneously (using online technology). But beware, what you do affects each and every character or environment. So which side will you choose?

The game has many attributes for different characters. For the team "Land Muggers", you can use Lulu's attribute (rich) to give you more moolah every so often for a period of time, which can be used for souping up your team. You can use Humphrey's attribute (tester and tech master) to test upgrades on captured Tree Huggers (in other words, upgrades become more effective). Some team members have the same attributes as other members, so choice of characters can, in some cases, be purely cosmetic. The other team, "Tree Huggers" posses other atrributes. For example, Abe, has the attribute possessor, which can allow you to posses 10 units or 1 hero. Munch's attribute, freedom fighter, frees slaves and/or workers of Land Muggers and has high zap damage. Big Face's attribute is teleporter, which allows him to teleport himself or others to an area (or both himself and others), which is similar to what we see in Abe's Oddysee. The Three Weirdos have the attribute revival, which can bring back a hero or ten units. Finally there's the Almighty Raisin, with the attribute "the eye". This allows the player to see the other team's base at a cost of his "mana". 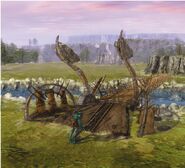 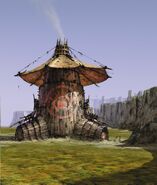 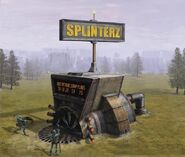 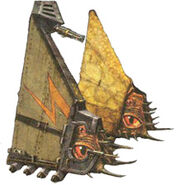 Behind the Scenes Edit

Hand of Odd gameplay footage can be found in some of the original early released footage of Munch's Oddysee. From what was seen in the footage, Hand of Odd and Munch's Oddysee were originally going to be two games. After the switch to the Xbox and the cease of production on Hand of Odd, developers tried to emulate features from Hand of Odd and modified them to fit with Munch's Oddysee's gameplay (e.i. ability to command groups of characters to complete tasks similar to the gameplay of its predecessors).

Retrieved from "https://oddworld.fandom.com/wiki/Hand_of_Odd?oldid=23672"
Community content is available under CC-BY-SA unless otherwise noted.