Near Threatened
Grubbs are salamander-like beings who inhabit western Mudos (the only continent on which the Oddworld games have taken place thus far), and have made their settlements along the Mongo River, their primary source of water. However, due to recent increases in the neighboring Clakker population, they have been forced away from the river, and are being mistreated by employees of Sekto Springs Bottled Water Company, which now owns the Mongo River. Grubbs once relied on the protection provided by the Steef, but fewer and fewer Steef have been seen in the wild, and the Grubbs are now fair game for anyone who wants to give them a hard time.

Grubbs are tribal people who prefer to live in small villages usually belonging to a tribe. However, Grubb villages are becoming more and more rare on account of Clakker and Industrial encroachment. One fishing village that Stranger visited exists in the southern Mongo Valley. It's relatively small with stone huts stacked upon each other. However, in the northern Mongo Valley, a Grubb fortress named Last Legs is found. Last Legs is quite possibly the last Grubb city, as the name suggests.

The Grubb Species believe in the Spirits of Nature, the greatest of which is the Great Spirit. Their personal favorite is the Spirit of the River, as their lives depend so much on it. To avoid disrupting the water’s flow, their settlements are built in canyons high above the water table. These dwellings grow into the walls of the valley, forming unseen caves and chasms. Grubbs revere the regular journey of Gabbits upstream to their spawning grounds at Ma’Spa (at the Mongo’s source) as a sacred event, and worship the Steef race as protectors.

They're viewed by more advanced and narrow-minded species as being highly superstitious. Although some Clakkerz such as Professor Dimble and Eugene Ius took an interest in their myths and legends, they readily dismiss the Grubbs as being a "bunch of silly, superstitious little fools". However, these tales of invasion are actual stories told of the privatization of their lands and the hunting of the Steef.

Grubb culture, apparel, and architecture seem to resemble Earth's Japanese, Native American, and even ancient Mayan cultures. Agriculturally, Grubbs are fishers. While being capable farmers and hunters, their small stature is suited more for fishing. Most, if not all, of their food is fish.

Despite their mostly harmonious lifestyle towards nature and other sentient life, the Grubbs have been known to fight back against aggressive invaders. When provoked, the Grubbs have been known to fight with spears and bows, and in some of their cities, they've even had the ability to procure cannons. Most Grubb warriors often wear segmented armor, similar to Lamellar armor worn by Eastern warriors. In winter conditions, they also sport protective headgear in the form of Ushabi helmets. Other types of helmets include a horned variant, with its own protective eye-slits. 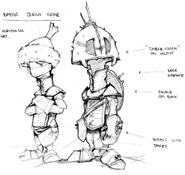 Concept Art of a Grubb Village

Concept Art of a Grubb Village