Least Concern
The Glukkons are one of the leading industrial races on Oddworld, with the sheer scope of their might rendering all other "industrial" races subservient. One of their most infamous and powerful organizations is the Magog Cartel, the dominant industrial power on Oddworld. Not unlike the Mudokon race, Glukkons were once a spiritually orientated society. However, Glukkons began to dabble with black magic in an attempt to earn notoriety and respect from other native Oddworld races; this approach backfired horrifically, almost causing their extinction. This disaster led to the surviving Glukkons abandoning their spiritual ways and becoming an industrial species. Modern Glukkons have an innate distrust of magical and spiritual practices. Due to their decrepit physical state, the Glukkons have enlisted the aid of the Slig race to act as their security forces and personal lackeys.

Glukkons are one of the main antagonistic forces in Abe's Oddysee, Abe's Exoddus, Munch's Oddysee, and Soulstorm.

As a species, Glukkons belong to the Octigi family, which includes Gloktigi (huge, brutishly strong monsters) and Oktigi (squid-like mind-controlling parasites). Glukkons have bulbous heads, bioluminescent eyes, leathery/scaly skin, and small, tube-like ears. Their Incisor teeth are rather large, taking up a large amount of space at the front of their mouths. Glukkons often vary in appearance between individuals. While a pink hue is quite common, Glukkon skin pigments have quite a wide variety, ranging from purple to green to brown. Glukkons have two long arms and two legs, but their actual legs have become vestigial in nature, with all of their toes reduced to a single curved claw. Due to this, they walk on their long muscular arms, supporting their body weight on their hands. Their legs have been rendered in such a way due to their decreased physical activity, as well as their increasing reliance on technology and lesser species to carry out manual work on their behalf. Because their hands are used for walking (as well as concealed inside shoes), they rely on Sligs and other races to do all their work for them. To hide their pathetic-looking legs, they dress themselves in full-fitted suits with wide shoulders to give themselves a large, domineering silhouette. Consequently, Glukkons are physically weaker than Sligs and Mudokons. However, in the upcoming game, Soulstorm, they have been redesigned and, although keeping their main bodily frame, their skin colour is now a light gray, their eyes no longer glow, and they have more distinct looks to one another.

As their name suggests, Glukkons are gluttonous carnivores, and will happily devour an entire species to extinction. Though it's still not known if the Glukkons actually consume the native species of Oddworld, since the consumers' identities are currently unknown.

The Schism and the Age of Alchemy

Outraged by the Mudokons' declaration of self divinity, the Glukkons cut off their relations with them. This event marked the beginning of a period known as the Age of Alchemy, in which the Glukkons tried to disprove the Mudokon belief of being the supreme species. During the Age of Alchemy, the Glukkons formed their own isolated society, in which they spent their lives indoors and refused to see the sky and the accursed Mudokon Moon that disgraced them. During their long period of being hidden in the darkness, the Glukkons underwent a stage of evolution in which their eyes began to glow in dark environments. They also developed sensitivity to sunlight. During the schism, groups of Glukkons throughout Mudos began to show signs of hostility towards their former Mudokon friends. The Mudanchee tribe were among the groups that endured hostility from the Glukkons. The Glukkons that associated with Mudanchee declared a state of war against the Mudanchee for their self-zealous attitude. The Mudanchee however, perceived the act of the Glukkons as a sign of betrayal instead of an act of war. The war led to the possible extinction of the Mudanchee tribe as well as the neighboring Mudomo tribe. As time progressed, they gradually abandoned their spiritual ways and moved onto specializing in business and industry until they became one of Oddworld's most prominent industrial races.

Rise of Glukkon Society and the Enslavement of the Mudokons

As Glukkon society continued to flourish, the Mudokons started to work with the Glukkons in creating the forerunners of the products manufactured today. Over time, the Glukkons belittled and oppressed their Mudokon collaborators and eventually enslaved their former allies. During their enslavement, the majority of the Mudokon species forgot their long-treasured heritage. The structures that remained from the once proud Mudokon race are either abandoned, nearly intact while being reclaimed nature or desperately being maintained by the few Mudokons that still practice their ancient traditions. As the Glukkons continued to surpass their long-time rival, the Magog Cartel was formed to strengthen the foundation of their industrial wealth. To ensure an unchallenged reign over Oddworld, the Magog Cartel started to recruit Sligs into massive armies of law enforcement agents and security. With the Slig species as allies, the Glukkons used hostile force to reap Oddworld of its natural resources. Although ruled by a Queen, the Glukkon race had adopted a government system that functioned in a mix between capitalism and a mafia.

Recession and the Rise of the Mudokon Terrorist

After enslaving the Mudokon race, the Magog Cartel had become an industrial juggernaut, with a majority of Oddworld's businesses controlled by Glukkons. One of the companies that stood out the most in Glukkon society was RuptureFarms, a food processing plant known for its wide variety of meat-based products under the management of Glukkon "Big Cheese", Molluck. During an unknown period of time, RuptureFarms entered what could be described as a recession as livestock began to grow scarce. In fears of bankruptcy, Molluck negotiated with his colleagues, claiming to have found an answer to the decline in livestock productivity. He proposed the use of Mudokons as a main ingredient in a new product known as Mudokon Pops, which was the first in a line of Mudokon-based products. However, a curious Mudokon floor waxer named Abe caught wind of the CEO's plan and managed to escape from RuptureFarms while liberating one fourth of the one hundred member Mudokon workforce in the process.

After a period of time, the Mudokon terrorist known as Abe had returned and liberated all ninety nine of the factory's Mudokon employees. During his escape, he was apprehended by Slig security and taken to meet Molluck in person. Moments before Abe's execution, a group of Mudokons came to the aid of the terrorist and freeing him; severely injuring the Big Cheese in the process. Following immediately after Abe's escape, Rupture Farms was destroyed by a mysterious Mudokon-made lightning storm. With the Glukkons main meat distribution source destroyed and 100 of their Mudokon Employees escaped, this caused a devastating blow to Glukkon economy.

Liberation of Necrum and destruction of SoulStorm Brewery

Not long after the destruction of Rupture farms, the Mudokons terrorist Abe, learned of Necrum, an ancient Mudokon tribal burial ground, from a trio of tormented spirits known as the Three Weirdos. The burial chambers were being dug up by greedy Glukkon Industrialists, who sought to use the bones to make SoulStorm Brew, as is revealed in the opening cutscene of Abe's Exoddus. To make matters worse, blinded Mudokon workers were being used to dig up the bones. The Weirdos pleaded with Abe to try and save the burial grounds so that the spirits could rest in peace. In response, Abe set off on a trek to try and save the burial grounds, with a group of Mudokon followers in-tow.

Eventually, after crossing a vast desert, they reached the Glukkon establishment. Soon after, Abe discovered SoulStorm Brew, an addictive drink concoction that made anyone who drank it utterly addicted (coining the phrase "One is too many. A million is not enough."). Abe traveled to the Mudanchee and Mudomo burial vaults to free the spirits there and gain the power to heal Mudokons addicted to the foul brew.

Abe moved on to FeeCo Depot, a major train station. From here he traveled to and shut down Bonewerkz and Slig Barracks, and eventually shut down FeeCo Depot itself.

Abe was soon on his way to the infamous SoulStorm Brewery, where SoulStorm Brew was concocted. He sabotaged brew production by possessing various Glukkons and freeing Mudokons, and ultimately blew up the factory. On his own, Abe managed to liberate all three hundred Mudokons from the facility. Again, as you could imagine, this caused another devastating blow to the Glukkon economy.

(More To Be Added)

Glukkons are a greedy and industrial race, who judge one another based on personal wealth or social status. This is seen with how Lulu is hated and disdained early in Munch's Oddysee, but is praised and respected after he becomes a rich and famous Glockstar. In Munch's Oddysee, there are 5 different levels of wealth among Glukkons, though it can be assumed that these levels do not necessarily apply to all Glukkons on Oddworld.

Three Wanna-Bes debating in a conference

The "Big Three" discussing the loss of the Fourth Member 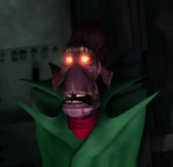 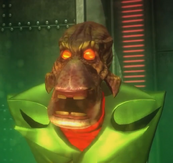 Vector trace of the Glukkon decal

Promotional image of the Glukkon in charge of FeeCo Depot.

Promotional image of the Glukkon in charge of Necrum Burial Grounds.

Promotional image of the Glukkon in charge of Soulstorm Brewery.

Promotional image of Oddworld: Soulstorm, showcasing the medal of the StockGluk Guild.

Promotional image of Oddworld: Soulstorm, showcasing the medal of the IronChronos Guild .

Promotional image of Oddworld: Soulstorm, showcasing the medal of the Royal Society of Alchemic Science. 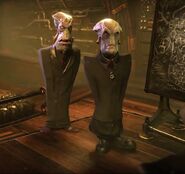 Molluck riding with his slig Chauffer
Community content is available under CC-BY-SA unless otherwise noted.
Advertisement