The Gloktigi is large squid-like species. They are a part of the Octigi family. The Oktigi named Mr. Sekto used two cybernetic enhanced Gloktigi in a failed attempt to defeat the Stranger in Stranger's Wrath.

The Gloktigi are large, slate gray skinned, aquatic creatures that are known to inhabit various aquatic locations in Oddworld (most notably Western Mudos). Their bodies consist of a pair of large arms each of which features three sharp claws. The head takes up a majority of the Gloktigi's body. The head of the Gloktigi consists of a large cranium with a small curled tail, a small pair of ruby/crimson eyes, as well as six tentacle-like mandibles protruding from its mouth. The Gloktigi, as well as every known member of the Octigi family, possess massive sack-like craniums which contain a majority of their vital organs along with their fairly massive brains. The physical immensity of their brains displays their mental prowess above other life forms that they encounter. By instinct, the Gloktigi use their long claws to both traverses on surfaces and to attack predators or prey.

They are able to spit out a luminous web capable of wrapping itself around a target like a Bolamite, before climbing onto the victim and impaling them with its large claws. Gloktigi can also use a transversal power to shift across the world in a spectral form much like a ghost.

Renders of the Gloktigi Model used in Stranger's Wrath

Rendered Model of an armored Gloktigi 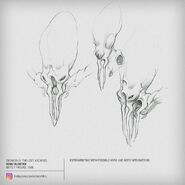 Concept Art for the Gloktigi
Add a photo to this gallery

Retrieved from "https://oddworld.fandom.com/wiki/Gloktigi?oldid=22109"
Community content is available under CC-BY-SA unless otherwise noted.