Gizzard Gulch is the first town Stranger encounters in the game Stranger's Wrath. It's the first Clakker town that one would visit to cash in the bounty for Blisterz Booty within the tutorial.

Gizzard Gulch is a small town within Western Mudos that was founded by the Clakkerz within the area. It's outlined with a bordered perimeter will wall structures and three gates forming as passageways into other locations.

Businesses Within The Town[]

Gizzard Gulch may be small, but it does have a lot of businesses and significant buildings within Western Mudos. These are such as follows:

Gizzard Gulch is the target of pillaging through Western Mudos, probably due to the fact that they don't have much security of their own. An example of this would be the Wagon Train supplies being raided by Filthy Hands Floyd and his band of train robbers. Another example of this is when Looten Duke, an Outlaw leader who took over the Water Treatment Facility, started to heavily tax the people of Gizzard Gulch for their water supply. The final example of the terror they go through is when Boilz Booty storms in with his gang and nearly destroys the town after a shootout with Stranger. The Clakkerz will rebuild, but they have been through quite a lot. 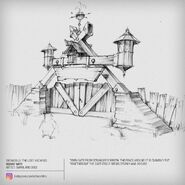 Concept Art for a Clakker Town Gate that would operate in times of crisis. 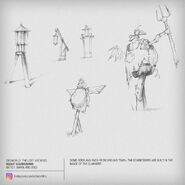 Concept Art of Props used within the outskirts of Gizzard Gulch.