Gabbits are short, blue-gray amphibious creatures that once widely inhabited the waters of Oddworld.

Their bodies consist of a large head with enormous eyes, a small round torso, and two short skinny arms ending in three-fingered hands. Their hind limbs are fused into a singular leg with a webbed, frog-like foot used for swimming in water and hopping about on land. Their noses rise high up on their face to quickly draw in air when surfacing, and four diamond-shaped protuberances jutting out of there temples, reminiscent of the gills of Axolotls and Mudpuppies.

Gabbits once freely swam through the oceans in abundance. However, industrial races such as the Vykkers hunted them, for two main reasons: their eggs, known as Gabbiar, is considered a delicacy, and their lungs make excellent transplants for lung cancer patients. Currently, Latamire Munch was the last known remaining Gabbit known on Oddworld during the course of Munch's Oddysee. The last can of Gabbiar eggs, however, was being held by Vykker's Labs to sell to the highest bidder, before Munch retrieved them after tricking a moneyed Lulu into purchasing them during an auction. He was due to visit a venerable area known as Ma Spa in order to fertilize the eggs, though whether he was successful remains unknown due to the cancellation of Munch's Exoddus.

Gabbits are extremely social creatures who speak to each other via high-pitched musical squeaks and whistles, produced by their flute-like tongues. Gabbits are also very playful and friendly creatures who enjoy a simple life of swimming or aquatic acrobatics, unburdened by technology. Gabbits are also remarkably intelligent, being one of the few non-civilized species on Mudos that are capable of speech. Gabbits swim together in family groupings called "pods" and eat mostly Worry Fish. Young Gabbits, or "Gabbiwogs" begin life in Ma'Spa, the source of the Mongo River. They gradually develop and grow, and then retreat to the Spawning Springs to develop lungs and mature into fully grown Gabbits, after which they take to the oceans. 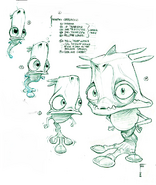 The Life Cycle of a Gabbit starting with Preemie Gabbiwogs. 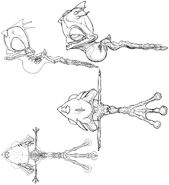