The Frogger is an unused creature seen in a plethora of concept art.

The Frogger appears to be an large, bipedal creature native to Eastern Mudos. The Frogger bears two large forearms, each one possessing a maximum of three toes. The Frogger also has a pair of four large eyes, a skinny, black tongue, and tendril like growths located at the end of its face. Furthermore, the Frogger comes in a multitude of colors and patterns being purple, green, or yellow. In some concept art, the Frogger shares a symbiotic relationship with a large creature that rest on back , working in similar function to a set of arms, of which the creature lacks. 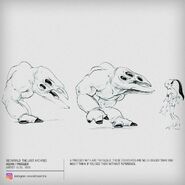 A piece of concept art depicting a frogger walk cycle 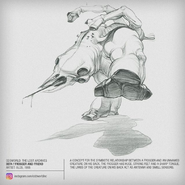 A piece of concept art depicting the symbiotic relationship 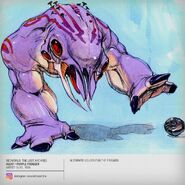 An alternate color for the Frogger