Though her name is never mentioned in the game, Frayda Evryting, plays a significant role - she is the leader of the Grubb rebellion and Grubb tribe. Talk to her in Stranger's Wrath - she gives you some key information about Stranger's role in their lives, the ancient Steef warriors, and Stranger himself. In the game itself, she's not mentioned before Stranger's secret is revealed. Her name, Frayda Evryting, could be a pun to why she was possibly too scared to stand up to the Clakkerz.

Back view from Stranger's Wrath HD 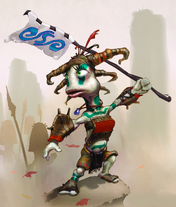 Lineart concept art (uncolored)
Add a photo to this gallery
Retrieved from "https://oddworld.fandom.com/wiki/Frayda_Evryting?oldid=21880"
Community content is available under CC-BY-SA unless otherwise noted.