Fleeches were originally engineered by Vykkers to be the perfect Glukkon pets, but accidentally gave them a six-foot long tongue for each of their two heads. As they grow up, Fleeches become increasingly aggressive and usually end up being flushed down a toilet by Glukkon children as a rite of passage before they become too large to cuddle.[1]

Fleeches survive their flush down the toilet, and have formed huge colonies in Mudos’ sewers or its vast network of caves. They are particularly prosperous in the jungles of Necrum and nearby vaults. It's unknown how much their behavior has been changed due to their genetic modification or brief captivity.

Fleeches have a mutualistic relationship with Slurgs, in which they are alerted to the presence of predators or prey in return for providing Slurgs with regurgitated offal as food. Slurgs emit a high-pitched squeak when stepped on that can wake a Fleech from its sleep and betray the location of potential food or threat.

Fleeches are known to eat Scrabs, Paramites, Sligs, and Mudokons. However, a Fleech will only attack in self-defense if cornered as Scrabs and Paramites normally prey upon Fleeches. A Fleech first subdues its prey by bludgeoning it with either of its long, adhesive tongues, then pulls it into its mouth, compressing it down with a burp.

Fleeches are quite unique in that they have two heads, and hence two mouths. Each houses a set of sharp, black teeth (8 external maxillary, 6 internal mandibular), and appears to have a permanent grin. The pivot for both sets of jaws is in the center of the body, allowing their jaws to open up to a 90 degree angle and swallow a Scrab whole.

The six-foot adhesive tongues of a Fleech are courtesy of the Vykkers’ genetic modifications. As well as being used as an offensive and defensive weapon, Fleeches use one to suspend themselves from a ceiling or overhangs when they are sleeping, and to climb up ledges. A Fleech’s skin is green, creased, and leathery to permit them from feeding or locomotion.

The appearance and behavior of Fleeches is drawn from a number of animals. The idea of pets being flushed down the toilet comes from the urban legend of baby alligators, taken from Florida as pets, being flushed down toilets and forming large colonies in the sewers of New York City. Although untrue,[2] the Oddworld equivalent is a fine example of Glukkon improvidence and throwaway culture. Accordingly, the mouths of a Fleech look like stumpy versions of a gator’s snout. The teeth are placed on the outside of the mouth to give it a cheeky yet threatening expression.

Their name is thought to be a portmanteau of ‘frog’ and ‘leech’, the sticky tongue of the former obviously being the inspiration behind the Fleech’s own. The Fleech's ability to stretch open their mouth is inspired by the ability of snakes to unhinge their jaws. Their locomotive cycle is based on that of the inchworm.[3] They have also been compared to sharks and, most obviously, worms.

Fleeches were designed by Farzad Varahramyan for Oddworld: Abe’s Exoddus. Early concept illustrations show a simple ball-like animal with no eyes, a large mouth, a set of vicious teeth, and some kind of opening on it forehead that can spit out a liquid. The black lips against a pale body was designed to make Fleeches very expressive despite their simple design. According to Farzad’s sketches, Fleeches were capable of emotions including "Hmmm?", "Sob!", "Grrr!", and "Eh! Eh!". These moods, especially the sobbing and snickering, have never been seen in Fleeches.

Fans have noticed that this prototype design looks very similar to a Fuzzle, and have speculated that it may have inspired, or otherwise branched into, the design of Fuzzles.[4][5] Some suggest it's the original, unmodified Fleech before it was altered by the Vykkers[6] or that Fleeches and Fuzzles are quite closely related. None of this has ever been commented on by Oddworld Inhabitants.

At the start of 2000, Oddworld Inhabitants fully expected Fleeches to be in Munch’s Oddysee,[7] but Fleeches never made it into the final game.

An Animation of a Fleech moving within Abe's Exoddus

In-Game Image of a Fleech within Abe's Exoddus 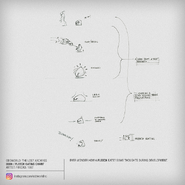 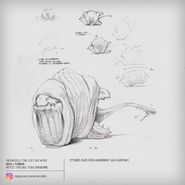 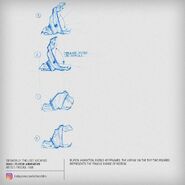 Animation Keyframes for a Fleech for Abe's Exoddus 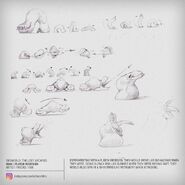 Character Design and Early Concept Art for a Fleech 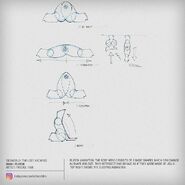 Joint Mechanics and Concept Art of a Fleech

Early Concept Art for a Fleech before it was redesigned.