"Hey, Stranger, I need you to bag Filthy Hands Floyd. He's been pestering our wagons for months and sayin' he aint even got serious yet. Head through the north gate till you find the wagons..."

A diminutive shooter outlaw, Filthy Hands Floyd is wanted dead or alive for blocking and eventually destroying the trail that wagon trains took to get supplies to the town. He's stationed in a canyon a short distance from Gizzard Gulch.

As the name implies, Filthy Hands Floyd is the most disgusting Outlaw there is within the region of Western Mudos. He has dirt and grime within his outfit and has very poor hygiene. His name implies this as the level of mud and dirt all over him coats him within his own stench, nose blind to his own scent. He is also known to be an infamous train robber, who leads his gang to pillage any supplies within the wagons.

Ambush at the Train Wagon[]

After the events of Stranger throwing  Blisterz Booty in jail within Gizzard Gulch, Floyd gets the word that a wagon train was coming to town with various amounts of supplies. The Outlaw ordered his troops to block the wagons to pillage the Clakkerz' supplies, which they do successfully with explosives. They then do a pincer attack, with the Outlaws flooding the wagons from all sides. This leads to the panic of the Clakkerz retreating within their homes and Stranger having to fight off his gang.

After Stranger beat all of the Outlaws that were attacking the wagon train, a Clakker comes out to thank the bounty hunter for saving them. Stranger then asks if there is a way to get back to town; the Clakker responds with confusion, wandering towards a platform. It is this moment when Filthy Hands Floyd makes his move and slams the ramp on top of the Clakker, killing him into little bits. This leads to Floyd and two of his guards attacking Stranger, initiating the boss battle.

Before one goes on the fight the Outlaw Boss, Filthy Hands Floyd will send out his two goons to go after you. One can hide behind a train car and lure them in with a Chippunk or just being spotted by them. When in close range, one has to option to live capture the two goons or kill them so you get Floyd by himself.

Floyd is armed with a rapid-fire volley/shotgun that shoots damaging shots of explosives at the player. It is best to avoid this by ducking for cover at the times of his rampage. To keep in mind, the rails leading up towards the boss are destructible. Once one can be in the range of taking Floyd down, there are some options for the player to choose from.

In the events of the player deciding to take Filthy Hands Floyd alive, one will have to use a Fuzzle to distract him. The Fuzzle will make sure that Floyd is distracted and he suppresses his fire for a limited amount of time. With this, it is advised that one would hit him with a charged Zappfly to bring down his stamina until it is low. Once the stamina bar is depleted, he will fall over and one can bounty him. To make this process easier before he can regain conciseness, hit him with a Bolamite. The live ammo will only hold him for a few seconds but it will give you enough time to bag him.

In the events of the player deciding to take Filthy Hands Floyd dead, one will have to use an arsenal of Fuzzles and only Fuzzles. Each of the gnaws from the fuzzy creatures will slowly deplete his health bar and make him frantically panic. It is quite humorous to watch him run around in fear and agony. In the events of a player running out of Fuzzles, there are some back in the house along the side of the canyon.

If one were to capture the Outlaw, Filthy Hands Floyd, alive, the Gizzard Gulch Bounty Store would reward one $200 in Moolah.

If one were to capture the Outlaw, Filthy Hands Floyd, dead, the Gizzard Gulch Bounty Store would reward one $100 in Moolah. 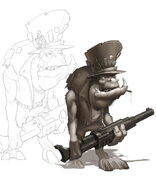 Line Art and Concept Art for the Character Design of Filthy Hands Floyd.

Filthy Hands Floyd and his Outlaw Minions ready to attack.
[]